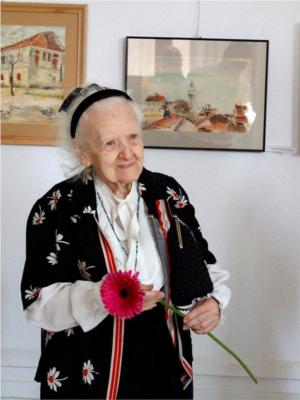 Margareta Wechsler Dinu was born in Brezoi, Vâlcea County, the daughter of a Jewish accountant, Daniel Wechsler, and a violin player, Amalia Hirschfeld.

Due to the rise in power of the Iron Guard, at the age of 8, she is forced to leave her hometown of Brezoi and in the next few years lives in several cities: Bucharest, Târgoviște, Cluj, Oradea, Râmnicu Vâlcea. She is spared deportation due to her father's veteran status. Medi pursues her studies, graduates the bourgeois "Choisi Mangru" high-school in Bucharest and speaks four languages; Romanian, German, Hungarian and French. Encouraged by her arts teacher, painter Costin Petrescu, she continues her studies at the Academy of Belle Arte, under Ipolit Strâmbu and Jean Alexandru Steriadi. At the same time, she studies at the Faculty of Mathematics under Dan Barbilian and the Faculty of Philosophy under Dimitrie Gusti and Nae Ionescu.

She debuts in 1932 at the "Official Salon of White and Black" exhibition in Bucharest, with a self-portrait. She joins the Syndicate of Artists a year later, which enables her to travel to Balchik, a meeting place of the (mostly Jewish) avant-garde artists of the time. Between 1934 and 1939 she visits the city of Balchik on several occasions and completes a number of works, befriending personalities such as Victor Brauner, Gellu Naum, Sașa Pană, Geo Bogza. Here, she also meets poet Gheorghe Dinu, who becomes her husband. In 1939, the mayor of Balchik, Octavian Moşescu, invites her to exhibit her works alongside other artists in the city's school.

After the Second World War, she is prohibited by the authoritarian Romanian Communist Party from publishing her works and begins working as a school teacher at a Jewish school in Bucharest.

Between 1940 and 1986 she travels and works in various cities in Romania, Bulgaria and France. Her work remains largely unknown, until 2003, when she returns to her artistic life and takes part in the "Senior contemporary painters of Romanian" exhibition, in Bucharest and receives critical acclaim.

In 2008, Margareta creates two exhibitions at the Museums of Art in Constanța and Tulcea, donating a part of her works to these institutions. In January 2009, at her centenarian anniversary, The National Foundation for Sciences and Art of the Romanian Academy hosts a retrospective exhibition of her works.

In 2010 she is awarded the "Victor Brauner Trophy" by the Niram Art Publishing House in Madrid.

In 2016, on International Women's Day, works of the artist, from various periods, were displayed as part of the exhibition "Ages of Youth" at the "House of Arts" Cultural Center in Bucharest.

Her works can be found at the municipal Museums of Art of Constanța, Tulcea, Râmnicu Vâlcea; at the Metropolitan Library "Mihail Sadoveanu", at Eminescu's Memorial in Ipotești and private collections.

The body of her work includes pencil drawings and paintings (water colors or oil) depicting portraits, nature or marine landscapes. Her work belongs to the classical style and can be described as lyrical figurative art, en plein air, almost mathematical in simplicity, nature being stripped down to its essentials.