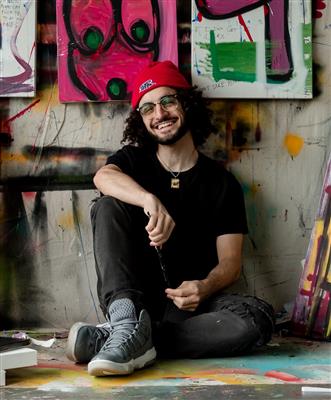 Anthony Sims' bold, chaotic expressions resurrect Mississippi's delta blues, refined by urban street culture and American Hip-Hop. Born in Southaven, Mississippi, and now based in Dallas, Texas, the self-taught artist first displayed his art at the Brooks Museum in Memphis, Tennessee, when he was 18. Sims' work is known for having vivid background imagery, monstrous figurative characters, warm toned patches, and articulate lines of poetry. By the age of 21, Anthony had two of his paintings accepted into the Meridian Museum of Art's permanent collection. Anthony has exhibited in Memphis, Dallas, Denver, Los Angeles, Oakland, Austin, and London with his works selling for five figures in both primary and secondary markets. In 2021, Anthony gained media headlines through the creation of animated NFT's with the most well known animation and painting, "Not Sure About Myself, I Am Certain," which sold for $99k in a primary sale. Sims makes raw, unfiltered figurative paintings that capture life from the eyes of bi-racial, Southern Americans who seek greater purpose and desire to overcome adversity regardless of their circumstances.


Anthony Sims was born in Southaven, Mississippi, and he began his career as a painter in Memphis, Tennessee.