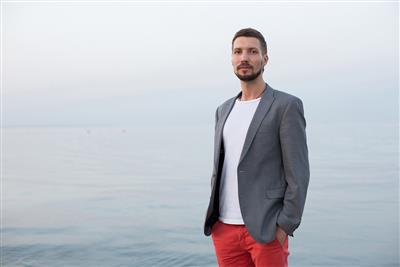 Stepan Ryabchenko (born October 17, 1987) is a Ukrainian new media artist. His work spans digital art, conceptual architecture, sculpture, and light installations. The focus of his attention is the boundary between the real and virtual world and the research of the new nature of art. In his artwork, the artist creates his own digital universe with its heroes and mythology. Known for his monumental prints and video-art installations of non-existent characters, including Computer viruses, Electronic winds, virtual flowers, etc.


Stepan Ryabchenko was born on October 17, 1987, in Odessa in a family of artists. His father, Vasiliy Ryabchenko, is one of the key figures in contemporary Ukrainian art, and the New Ukrainian Wave; Stepan’s grandfather, Sergey Ryabchenko, was a Soviet and Ukrainian graphic artist.


He graduated from the Odessa State Academy of Civil Engineering and Architecture in 2011 with a master's degree in Architecture.


From 2020 Stepan Ryabchenko is the chief curator of the Art Laboratory creative organization.


He is the curator of the large-scale international exhibition in the virtual space “Strange Time”, which was launched on May 7, 2020, during the COVID-19 quarantine. The project develops as a living organism, replenished by artists from around the world and expanding its borders.


Lives and works in Odessa.


Stepan Ryabchenko is an artist for whom digital tools have become fundamentals for his artistic works and projects. Combining figurative and abstract futuristic language, he creates largescale digital prints and computer animation, which become "fragments" of the virtual universe he designed. Often the subjects of the image are imaginary plants and animals – the surrealistic appearance of the life form, existing according to the laws of the world created for them by the artist. The virtual landscapes in which Ryabchenko unfolds the stories of the characters are a self-sufficient multidimensional digital reality. Despite its technological digital origin, the appearance of this space is far from all urban and man-made. In his other works, Stepan Ryabchenko explores digital “antiheroism” by visualizing computer viruses. Using one of the components of the technogenic development of mankind as a tool, the artist appeals to the topic of human relations with the virtual and natural environment.