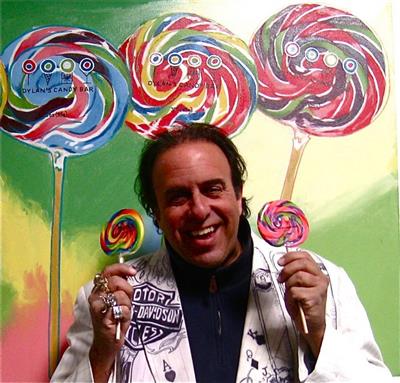 Steven Alan Kaufman (also known as Steve Kaufman, December 29, 1960 – February 12, 2010) was an American pop artist, fine artist, sculptor, stained glass artist, filmmaker, photographer and humanitarian. His entry into the world of serious pop art began in his teens when he became an assistant to Andy Warhol at The Factory studio. Nicknamed "SAK" by Warhol, Kaufman eventually executed such pieces as a 144-foot-long canvas which later toured the country.


Steve Kaufman was born in 1960 in the The Bronx, New York, the middle child, surrounded by an extended family, many of whom were painters and sculptors that were a significant influence on him and his views on art. His father died when he was four years old. His mother painted high fashion oils on canvas, and he was taught sculpting by his uncles. Kaufman commented on his family, "They taught me that to be an artist is to be always changing. So I tried all different forms of art and today I have 15 different styles that I work in. Art should always be about changing. A lot of artists will work in one medium their whole career, but I didn't want to ever get bored. I was taught that canvas is not the only thing to paint on." Kaufman had his first show at age eight, at a Jewish Temple in the Bronx.


At the age of 8, he was sponsored by a synagogue and held his first one-man art show at a Bronx bank, presenting images that were later donated to the Jewish Holocaust Memorial in Brooklyn, New York.


In 1975, Kaufman participated in a group graffiti art show at the prestigious Whitney Museum of American Art.


By the time he was 16, Kaufman was going to Studio 54 and associating with people from the 1970s New York City art community.


Kaufman attended Manhattan's School of Visual Arts (SVA). In 1981 Kaufman met Andy Warhol, who became a significant influence on the 19-year-old Kaufman, who worked as Warhohl's assistant at his studio, The Factory, producing original paintings and silkscreens. "As Warhol's assistant, I learned to silkscreen with oils that will last forever. That's the same process I use today. Andy Warhol never did giclées. Neither will I." said Kaufman. Kaufman designed theme parties for various nightclubs, sold his paintings to Calvin Klein and Steve Rubell, and participated in a group art show with pop artist Keith Haring, whom he had met at the SVA.


Kaufman created the graphics for NBC's Saturday Night Live. Kaufman graduated from SVA with a Bachelor of Fine Arts degree and held art shows in London.


In the late 1980s, Kaufman participated in an AIDS demonstration in order to lock the New York City mayor in his own office, during which he was arrested. Kaufman campaigned for AIDS awareness with art shows featuring 5'x 5' paintings of Trojan condom wrappers. He held a condom art exhibition at Main Fine Art, Edinburgh College of Art, Zanzibar Club and the Smith Gallery.