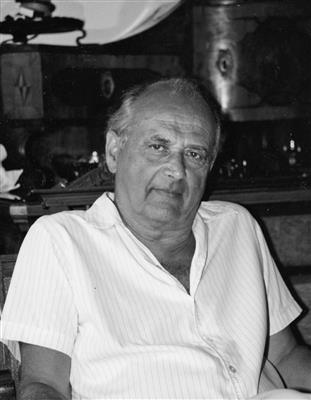 Rudolf Bér was born in Hungary in 1924. He graduated from the Academy of Fine Arts in 1950 as a student of AURÉL BERNÁTH and GYULA RUDNAY. In 1974 he was awarded the Munkácsy Prize, Hungary’s highest accolade to an artist. He is a first class large-scale painter; in the seventies he did several mural paintings in secco and inlay technique. One of his murals, a secco of 80 square meters, decorates the University of Budapest. In 1980 he won the Gold Medal and Fellowship of the Academia D’Italia.

Since the 1960’s, he has taken part in every major national exhibition at home and has repeatedly shown in Italy, France, Germany, Russia, and Switzerland.

Rudolf Bér has a very strong spiritual energy that speeds up the picturesque excitement of every work. Power and Vigor - these are the first words that come to mind while viewing his paintings. Showers of color pour down upon you, vibrant yellows, prismatically broken greens, sparkling reddish blues, lilac-ly resting browns. One cannot take inventory of the quantity of shades.

His paintings are a psychoanalysis of reality. Through his expressive symbols, we find freedom of spirit in his lively, rhythmical paintings. Bér is an optimist - taking into consideration that optimism is not descriptivism - but awareness of life. He is an important complete artist, who successfully combines the unique language of knowledge, meditation, and sensitivity that touches the borders of the universal world.