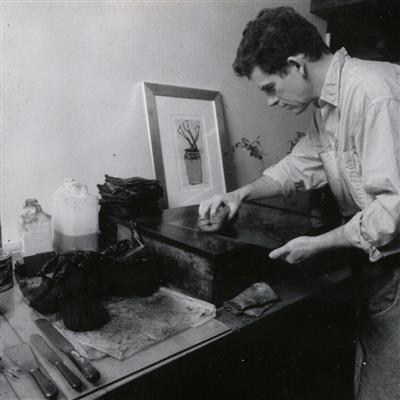 
Richard John Spare, (born 1951) is a British artist known primarily for his drypoints, etchings and oil paintings. He is based in London.


Spare attended Maidstone College of Art (1971–74) (now the University for the Creative Arts) where he studied painting under Fred Cuming. On leaving art college, Spare honed his technical skills at Thomas Ross & Son of Putney (1974–77), where he was involved in printing George Stubbs prints, which were sold through the Tate Gallery, and the renovation of fine Turner aquatint plates, which were exhibited at the Royal Academy of Arts Turner Bi-centenary Exhibition. Spare also printed original plates from masters including Hogarth, Cruikshank, Rowlandson, Gillray, Landseer and mezzotints by Martin.


A master printmaker, Spare has editioned work for many contemporary artists, including David Hockney, Robert Ryman, Francesco Clemente, Donald Sultan, Jim Dine and Keith Haring. In 1977 he worked with David Hockney as his assistant, setting up an etching studio for him and printing five editions from Hockney's 'The Blue Guitar' folio. Being able to watch Hockney at work on his sets for the Glyndebourne 'Magic Flute' developed Spare's technical interests and appreciation of simple form.


In the early eighties, Spare was involved in printing the 'Banks' Florilegium' (Egerton-Williams Studio), the largest restorative printmaking project of the twentieth century. The plates for the 743 engravings of plants, from watercolours by Sydney Parkinson were made during the first voyage of James Cook to Australia. Having been stored in the British Museum for 200 years, wrapped in a paper containing acid, they had become corroded. Meticulous restoration and demanding à la poupée printing ended with the Museum's Botanical Editor checking them for botanical correctness before they could be published.


In 1989 the entirety of Keith Harring and William S. Burroughs' project 'The Valley' was printed by Spare in London. Published in 1990.


Since the late 1980s Spare has concentrated solely on his own work, which derives from nature and travel. To date he has published more than 400 images. His characteristic hand printed and watercoloured original drypoints are admired for their pared down, and unique, view of the world – 'the joy of being'. Colour is a crucial element to Spare's work, each being selected to 'vibrate with the velvet black of the drypoint line'. Spare's Wellington Studio garden in Charlton was designed as a rich source of inspiration. Focusing on wildlife it is a 'small haven' for the subjects of many of his works. Wellington studio is a 'homage' to the art of printmaking, with five restored antique etching presses, housed in a converted Victorian coach house.