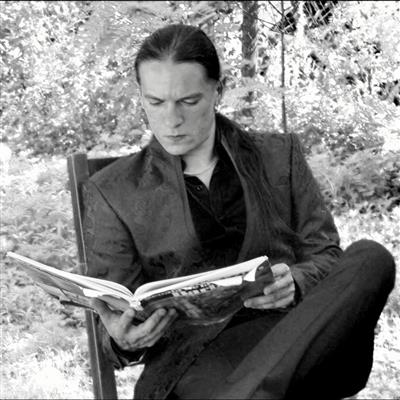 Photo from exile , explaining some aspects of someone's from Barbizon school

Noktys Nokte's human and artistic destiny reiterates the eternal drama of the intellectual, of the artist, designed to transfigure reality through the diversity of the themes approached and his manner of deforming everything by color, thus communicating through the nonverbal language of the plastic arts.

The opening of adolescence and youth, marked by sentimental effusions, by the enthusiasm of the first artistic manifestations that made him confident in his possibilities of affirmation in the field of painting, pushed him from the fragile years of childhood to the springs of knowledge, perfection and gaining certainty on his own intellectual ability to discover the universe.

The total trust in the possibilities of reason to reach the ultimate truths of existence, the drama of non-fulfillment, the struggle with oneself, with the real possibilities of man to decipher the meanings of a world through art, to achieve revelation, is a permanent struggle with himself both in expression and in destiny.

Beyond the knowledge of artistic consciousness between "ugly and truth", the unsettling feelings of his work are often drawn by lyrical effusions, thoughts, and personal ideas with a profound philosophical transposition that bind the existence of life with the passing of both matter and spirit to eternity.
His touches do not need to be deciphered, explained, but ecstatically experienced at a level of maximum gravity. Their "irradiation" power must be accepted, sustained, and not apriori avoided on the reason that the chromatic subtleties are sometimes so rare in his work.

Lately, Stoian Andrei Stefan's painting is really the image of the drama of his artistic consciousness. It "speaks " through obsessive glances, motives, tellurian thoughts.

But the look is not and can not be interpreted only as a simple way of expression, but as an alternative to life, consciousness, attitude. Every visual encounter with the sky or earth, transposed in diffuse forms with intense, expressive and volcanic experiences, awakens a painful feeling of solitude with an acute interrogative note: Why?, How?, So be it? Who am I?, What for?, How far?, Where to?...and the questions could continue.

The eye, a window to the wisdom, a gate to the human microcosm through which the macrocosm is reflected, thus becomes a mirror of consciousness.

He was born a painter, shortly before the 1989 revolution, In Romania is one of the first national elites, internationally recognized, as one of the most controversial "free" artists after the fall of communism.

In Italy he studied human anatomy on the painting treaty of Andreea Cennino Cennini, studied the play of lights and contrasts in the dark clearly on the famous works of Michelangelo Merisi by Caravaggio among other somites of Italian painting, Caravaggio being among his favorites from Italy.

• At the end of 2014, he returns to Romania, from his trip to the United Kingdom.

• At the beginning of 2015, a massive artistic initiative starts on all levels, painting around 350-400 works, including 80-100 technical studies in oil but also acrylic or simple pencil graphics, most of them executed on paper.

• In 2016 he becomes the leader and founding member of the international community "Elite Art World". Also in the same year, he is appointed by Dr.Prof. Traian Marza as President of the Strategy and Communication Department of the Plastic Artists Union, the branch in Bucharest, in partnership with the Romanian state institutions and local public authorities.

• Noktys Nokte participates in several cultural TV debates with journalist Silviu Alupei, mainly about the great Romanian sculptor Constantin Brâncuși and about contemporary art. At the Estrada Tv station, the topic of debate "Brancuși a good brand to grind",. Question and affirmation in the program "Informed and involved", was a real success.

• In the summer of 2016 he also receives the proposal to be vice-president of the C.Brâncuși Institute in Craiova but also of the “Senior Art” Gallery. Both proposals are rejected by the artist because of the lack of time because he prefers to dedicate himself to cultural activities to the detriment of administrative ones.

From the same summer to the end of the year, Noktys Nokte receives numerous invitations to exhibit personal works in renowned museums, palaces, sound art galleries and luxury hotels in the native country but also an impressive wave of international invitations from several galleries. multinational art, museums, and even some auction houses, for exhibitions, but due to financial difficulties, it is necessary to place some of the pending applications for an indefinite period of time.

• The artist in 2017 receives the proposal to be registered in the Art Index - the National Art Register of Romania and the Encyclopedia of Romanian contemporary artists among others.