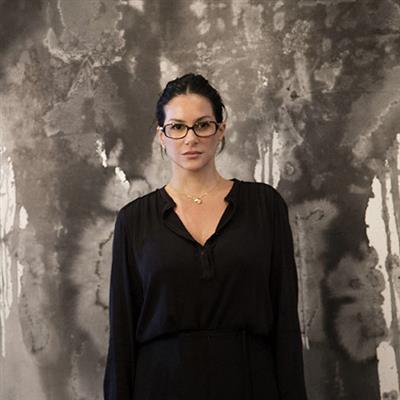 Paula Klien explores the invisible, working the accidents in the realm of spirituality, transcendence, silence and surrender. Her previous ten-year-experience with photography has been a liberating counterpoint for her intuitive journey.

As a photographer, the artist took part in the laboratory course and in the professional preparation for The Power of Nature with Steve McCurry. She was managed by ABÁmgt, while shooting many fashion campaigns and editorials. Paula Klien published two portrait books titled “Pessoas Me Interessam” (People Interest Me) and “It’s Raining Men.” She has also participated in other publications by invitation. Paula’s work has been displayed in Cultural venues, in collective exhibitions and solo exhibits such as “Edible” and “Gatos&Sapatos.” She has participated in two Biennales in Italy. As a member of Abrafoto and represented abroad by Production Paradise, she has clicked a huge number of models and personalities in Brazil and abroad. She was the last one to photograph Oscar Niemeyer in his bedroom at the age of 104 a few days before his demise.

Drawing and painting were Paula Klien’s first manifestations, but she has also worked with dance, music and has been a law student. Throughout her development, she has taken courses at EAV Parque Lage and has studied Art History with professor Marcos Campos. In 2016, she went to an art residence at KUNSTGUT School of Visual Arts in Berlin.

In 2017, she showed her work abroad six times, three of them in Berlin: a solo and a collective at the aquabitArt Gallery, which currently represents her work in Berlin, and another exhibit at the Positions Berlin Art Fair with the gallery. In New York by invitation of the Clio Art Fair, Buenos Aires with the Emma Thomas gallery at ArteBA, and London in a sought after solo exhibit at the Saatchi Gallery. In November, with Aura gallery at FEIRA PARTE in São Paulo.

In 2018, three more times in Germany: Paper Positions Berlin, a collective exhibition at aquabitArtgallery and another one at Deutsche Bank Finance. In Italy, the Salerno biennale. In Brazil, back to Emmathomas gallery she participated in the exhibition Desver A Arte, she had a huge arwowork in the living room signed by famous architect João Armentano at CasaCor São Paulo and also participated in ArtRio 2018. She was the only brazilian invited to participate in the exhibition titled Pincel Oriental at Centro Cultural dos Correios together with recognized chinese artists and she also had a solo exhibition tittled Extremos Líquidos, curated by Marcus de Lontra Costa at Casa de Cultura Laura Alvim in Rio de Janeiro.


Klien represented Brazil at the International Art Biennials in Firenze and Rome in December 2011 and January 2012.


In 2016, Klien returned to painting, and presented her most recent work in February 2017, in the individual painting ""invisibilities"", in Berlin.


“Invisibilities" consists of eleven large paintings on canvas and paper, two backlights and a three-dimensional work created with chinese ink on foam.


Self taught in drawing, painting and photography, she also studied at the visual arts school of Parque Lage (EAV) in 1982, participated in a lab with Steve McCurry – New York City in 2006 and studied at the Kunst Gut Academy of Fine Arts – Berlin in 2015.


Klien's photography has been featured in fashion editorials and essays, and has been the subject of photography exhibitions and publications. She was represented by ABÁmgt, is also a member of Abrafoto and is represented abroad by Production Paradise.