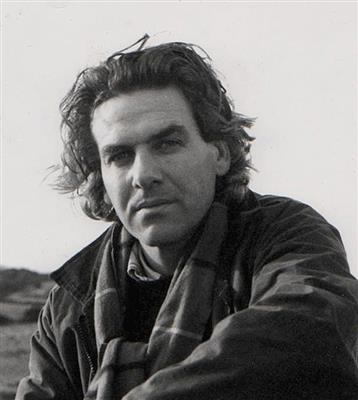 From 1972-1973 Henderson studied an Arts Foundation course at Ulster University, then he studied Fine Art at Kingston University, achieving a Bachelor of Arts first class honours degree under the tutelage of Terry Jones. In 1977 he returned as Artist in Residence. In the same year he became the first recipient of the Stanley Picker Fellowship Award. He completed a MA postgraduate in Fine Art at Chelsea School of Art under the artist John Hoyland.

Exhibitions both north and south of the Irish border were unusual at the time due to the troubles, but his pure and authentic style and interpretation proved popular throughout. Henderson's work has been represented at numerous exhibitions in the United Kingdom and USA.

In the early years, virtually penniless he lived inside a tent in a vast defunct brewery in London's East End. In the 1990's he returned to Ireland with his partner Patricia Martinelli, whom he later married in 1995 and had a daughter in 1997. They remained together until his death.

Henderson created a unique set of enamel art works for the Clinton Peace Centre, inaugurated by President Bill Clinton in 2002. Henderson was influenced by his formative years and the troubles of the region at that time. Though dedicated to his work and never courting public attention his works were noticed by both public and official figures, with works being purchased by collectors such as the rock singer Bono, Northern Ireland Civil Service and Smurfit Kapa Plc.

Throughout his career Jeremy Henderson created numerous series of art works reflecting his interpretation of the landscape around him, always fired by his passion for life and its natural integrity. Dedicated to his art Henderson continued painting until close to his death, caused by a brain tumour.

Jeremy Henderson (25 December 1952 – 28 April 2009) lived for art, he was a British artist and painter. Artist in Residence at Kingston University, with art exhibited at the Royal Academy and in National Art Collections.

From 1972 to 1973 Henderson studied an Arts Foundation course at Ulster University. From 1973 to 1976 he studied Fine art at Kingston University, London, achieving a Bachelor of Arts first class honours degree under the tutelage of Terry Jones, returning in 1977 as Artist in Residence. In the same year he became the first recipient of the Stanley Picker Fellowship Award in Painting. Between 1978 and 1979 Henderson completed a MA postgraduate in Fine Art at Chelsea School of Art under the tutelage of the artist John Hoyland.

In 1980 Henderson started his professional artistic journey, developing abstract techniques, creating large canvases with complex layers of overlaid and inter-worked paint. Henderson lived and painted in London for 20 years before relocating back to Ireland. In the mid 1980's he worked in a studio adjacent to the house he shared with his partner, Jenni Stone with whom he had a daughter named Emerald.

In 1990 Henderson moved to the Cooperage Studio, Brick Lane, London, sharing the top floor with sculptor David Fusco and artist Bryan Benge, a friend from Kingston University. Benge says "Every Summer the studios in the East End became part of the open studios programme. . . . . He was an intelligent and incredibly accomplished Painter". It was here, separated from his partner and virtually penniless, he devoted himself entirely to his work, living in a tent, donated by Benge's parents, inside the studio .

Henderson was married once: in 1995 to the actress Patricia Martinelli with whom he subsequently had a daughter in 1997, Bella-Lucia. Henderson remained married, living in the remote village of Boho in Northern Ireland until his death, brought on by a brain tumour, on 28 April 2009. He remained a prolific artist throughout his life.

In 1975 Henderson exhibited for Stowells Trophy at the Royal Academy. In 1977 Henderson became Artist in Residence at Kingston University.

During the mid-1980s Henderson's work became recognised by private and public collectors, including Bono, leader of the Irish rock band U2. During this period Henderson sold his first work to the National Art Collection (1986). 'Cuilcagh Under A Renaissance Sky' was purchased for Fermanagh County Museum with a grant from the Arts Council of Northern Ireland during his first solo exhibition "Around a Border" in Ireland. This was followed by 3 more acquisitions via the Arts Council during the 1980's, who have continued to support his work into the new millennium acquiring "If Hobbema had Seen Ireland" (1989) in 2004 via Art Fund with support from the Esmée Fairbairn Foundation. His work is exhibited by Arts Council England