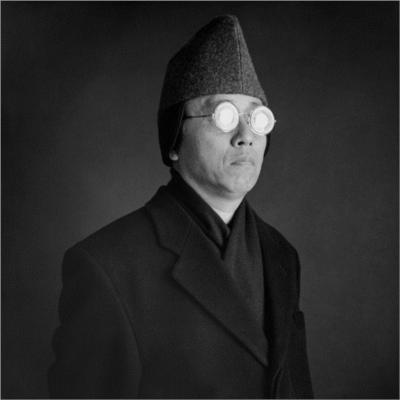 Hiroshi Sugimoto was born and raised in Tokyo, Japan. He reportedly took his earliest photographs in high school, photographing film footage of Audrey Hepburn as it played in a movie theater. In 1970, Sugimoto studied politics and sociology at Rikkyō University in Tokyo. In 1974, he retrained as an artist and received his BFA in Fine Arts at the Art Center College of Design, Pasadena, California. Afterwards, Sugimoto settled in New York City. He soon started working as a dealer of Japanese antiquities in Soho.

Sugimoto has spoken of his work as an expression of ‘time exposed’, or photographs serving as a time capsule for a series of events in time. His work also focuses on transience of life, and the conflict between life and death.

Sugimoto is also deeply influenced by the writings and works of Marcel Duchamp, as well as the Dadaist and Surrealist movements as a whole. He has also expressed a great deal of interest in late 20th century modern architecture.

His use of an 8×10 large-format camera and extremely long exposures has garnered Sugimoto a reputation as a photographer of the highest technical ability. He is equally acclaimed for the conceptual and philosophical aspects of his work.

Sugimoto began his work with Dioramas in 1976, a series in which he photographed displays in natural history museums. (A polar bear on a fake ice floe contemplates his fresh-killed seal; vultures fight over carrion in front of painted skies; exotic monkeys hoot in a plastic jungle.) Initially the pictures were shot at the American Museum of Natural History, a place he returned for later dioramas in 1982, 1994, and 2012. Where many of the earlier silver gelatin prints – including Polar Bear (1976), his first photograph from the Diorama series –, present animals, a number of the 2012 photographs including Mixed Deciduous Forest and Olympic Rain Forest focus on natural landscapes. The cultural assumption that cameras always show us reality tricks many viewers into assuming the animals in the photos are real until they examine the pictures carefully.

His series Portraits, begun as a commission by the Deutsche Guggenheim in 1999, is based on a similar idea. In that series, Sugimoto photographs wax figures of Henry VIII and his wives. These wax figures are based on portraits from the 16th century and when taking the picture Sugimoto attempts to recreate the lighting that would have been used by the painter. Focusing on Madame Tussaud's in London, its branch in Amsterdam and a wax museum in Ito, Japan, Sugimoto took three-quarter view photos, using 8-by-10-inch negatives, of the most realistic wax figures. They are typically taken against a black background. In Praise of Shadows (1998) is a series of photographs based on Gerhard Richter’s paintings of burning candles.

In 1978, Sugimoto's Theatres series involved photographing old American movie palaces and drive-ins with a folding 4x5 camera and tripod, opening his camera shutter and exposing the film for the duration of the entire feature-length movie, the film projector providing the sole lighting. The luminescent screen in the centre of the composition, the architectural details and the seats of the theatre are the only subjects that register owing to the long exposure of each photograph, while the unique lighting gives the works a surreal look, as a part of Sugimoto's attempt to reveal time in photography. Sugimoto discovered that "Different movies give different brightnesses. If it's an optimistic story, I usually end up with a bright screen; if it's a sad story, it's a dark screen. Occult movie? Very dark."