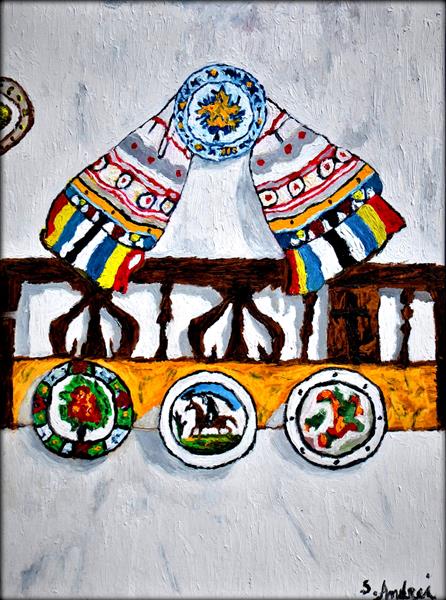 Author's description:
„On the ocasion of the 1918 centenary of the Union,I did this work in which I used suggestive symbols that are not normally found in the design of this type of rural image.

The composition of this work translates important symbols for the Carpatho-Danubian spirituality.Framed by the towel with the insignia of the Romanian tricolor,on a blue plate,representing the heavenly vault,I put the symbol of the nation's stability:the vine...Only the settled,stable peoples cultivated this plant from which the Eucharist wine is made.

Somewhere on the right,I have subtly attached the sign of the cross,suggesting one of the four fundamental myths of our spirituality:the myth of the sacrifice underlying each creation and,at the same time,,the symbol of the man who remembers anyone and ever of Jesus Chrisy by his supreme sacrifice at the border of eternity,as a form of sacrificial love for his fellow men.

Of course in those times,this morbid form of torture was a common practice,long before Jesus Christ appeared among ordinary people...probably also because of the low level of civilization and of the thirst for imposing power in a manner as wild as possible, meant to induce fear by barbaric punishments,for the purpuse of imposing supremacy at any cost...

The towel is made more distinct,by the current symbols of our identity,the three colors with their symbolism.

Red is the blood shed by our forefathers on these present-day Romanian lands over the centuries.It urges the love of nation and country to be as lit as the fire of the red flag.

The yellow color suggests the grandeur of the country,the prestige and the virtue and also the wheat fields that have always offered us the daily bread in our existence...and the blue,symbolizing the serenity of the sky,and the mind of the Romanian people,but also the faith and power with which we are bound to our lands...

The three plates below contain the symbol of the tree of life,Adam's apple,the ancient symbol of a culture with pagan roots and origins that represented since the beginning of the time,the sin,as mentioned in the Bible.

The legendary Thracian knight exploring the Carpathians is not missing in the composition of this painting.At those crucial times,when civilizations were fighting with cold blood one against the other,for power and rich resourses,at a time when tribes were practically in full expansion for the vital space,the Dacians ,having a pagan spirituality of Hellenic origin but with strong roots in the land that fed them,raised at the rank of a god a simple man,Zamolxe.A native pagan practice coming from the ancient Greek mythology which also reminds of the Olympian deities.

This aspect speaks about the imprint of an intelligent and steady people that appreciated the spiritual values.

The last symbol on the right represents the mirable seeds,stylized in an abstract manner,representing for us and for all the peoples, the fruit that nourishes us.

The work,as a whole speaks subtly and easily suggestively through the mute language of colors about our historical origins,with ancient roots,but also about the spirituality of this nation,from the oldest times to the present.

I believe that in order to understand the present,we need to really know the past,without any hypocrisy and political interests that falsified our history as many times as necessary to those who represented the power over us,constantly deceiving generations after generations for their personal purposes."