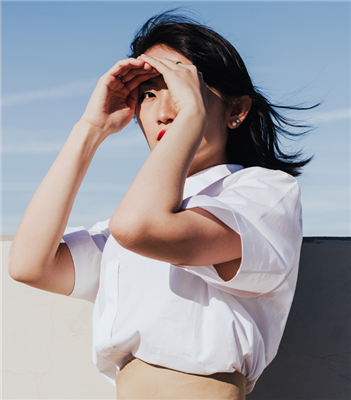 Victo Ngai (倪傳婧), was born in South China in 1988 in Guangdong Province. Ngai grew up in British colonized Hong Kong before enrolling in Rhode Island School of Design (RISD) in 2006. She shortened her name to "Victo" from "Victoria" - a name she considers leftover from the British colonization of Hong Kong.

Until the age of 6, Ngai would be plagued by fevers that induced near-fatal seizures. With nowhere else to turn, Ngai's mother turned to herbal treatments to cure her. It was at this point that Ngai's mother recognized her daughter's artistic talent, and so, she took Ngai to a private art teacher in Shenzen. Ngai would build incredibly on her skills and in 2006 she applied, and was accepted, into RISD, the only school she applied to. At RISD, Ngai was heavily inspired by her professor, editorial illustrator, Chris Buzelli. Initially, Ngai struggled in Buzelli's editorial course, but when Buzelli had encouraged her to pursue the incredible line-work displayed in her sketchbooks, Ngai had an artistic breakthrough. Her work and signature neo-surrealistic style would soon become instantly recognizable to anyone who saw it.

Currently, Ngai works freelance out of Los Angeles. She taught at the School of Visual Arts (SVA) in New York City, and recently won gold for advertising at the Society of Illustrator's 61.

Victo Ngai (born 1988) is an American illustrator raised in Hong Kong. Her work has been described as being highly detailed and precise, referencing comic book drawings, classic children's book illustrations, the work of Japanese painters, and more. Illustrations created by the artist are often considered to contain compelling imagery and unique styling.


Ngai (pronounced nye), was given the name of Victoria, which she later shortened to Victo. Born in Guangdong Province and raised in the former British colony of Hong Kong as the only child of middle-class parents, Ngais' father worked in finance and her mother worked in a variety of jobs, including professor of Chinese literature, newspaper editor and the manager of an investment company. Often bedridden with high fevers until the age of six she took to drawing as a way to keep herself entertained. Her mother sought out traditional herbal treatments, which not only ended her fevers but also inspired her mother’s next career as a doctor of Chinese medicine


Her great uncle was a surgeon with a passion for meticulous Chinese ink painting and drawing with him was one of her first art encounters. Ngai also went to many museum exhibitions with her mother as a child.


The artist's family moved from place to place often when she was young, which did not allow for lasting friendships and as a result her childhood was a largely solitary one. Ngai would later credit the instability in her early life with the birth of her artistic identity.


Ngai's mother first noticed her artistic talented and feared that "rigidly technical Chinese art taught in school was stifling it." For two years during summer vacation, Ngai was taken to a private art teacher in Shenzhen on mainland China, which although geographically close, was like "visiting another country" because of the customs immigration process, according to the artist. It was there that Ngai’s creative confidence began to flourish.


When Ngai started thinking about an education in illustration, it was a difficult decision, because the artist and her family believed there was a prejudice in Asia against art and design. Her father hoped she would go into finance as a career.


A friend who studied art at Yale, recommended the Rhode Island School of Design and that was the only school she applied to.
Ngai was accepted at the Rhode Island School of Design in 2006 where she was mentored by the award-winning illustrator, Chris Buzelli, who importantly taught the young artist that an individual style is something you have to search for within, and not search for outside.


When asked why she became an illustrator instead of a fine artist, Ngai replied, "One of my RISD professors told me this back in freshmen year, 'Fine artists like to create problems for themselves while illustrators like to solve problems given to them'. I love drawing and I love problem solving, hence illustration."