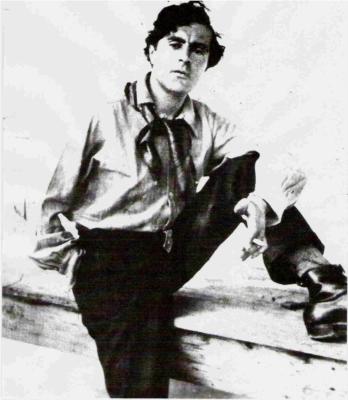 Amedeo Modigliani was the epitome of a tragic artist. Born to a bourgeois family in Italy, he later shunned his academic upbringing and willingly devolved into a poverty stricken vagabond. He was formally educated as a life painter in his teens, quickly developing a life-long infatuation with nudes. In 1902 he moved to Florence to study at the Academia di Belle Arti, at the “Free School of Nude Studies,” and a year later he moved to Venice as a fledgling artist, where he smoked hashish for the first time. It was only after he discovered narcotics that he developed the philosophical belief that the only path to creativity was through defiance of social norms and disorder in life. Thus began a life long affliction with corrupted beauty, which would ultimately end with his untimely death and the suicide of his grief-stricken wife and their unborn child.

Modigliani contracted tuberculosis at an early age, and was constantly stricken by his deteriorated health, which may be one reason why he so willingly engaged in self-destructive behavior. Living in Paris, he had affairs with women, drank heavily, smoked hashish, and drank absinthe. In a drunken stupor, he would often strip naked at social gatherings. He was against all of the excesses of a Bourgeois lifestyle, and thus stripped them from his life, even destroying paintings that he had made in his earlier years.

Although he purposely created a life in which chaos, poverty, and doom lurked in every corner, he was a prolific artist. He sketched furiously, sometimes drawing over 100 sketches in a day, but many of his works were either lost, given away, or in some cases, destroyed by Modigliani himself. His favorite subject was by far the human form, painting the likenesses of other artists, such as Pablo Picasso, Diego Rivera, Max Jacob, and Juan Gris, who all sat for the artist. His formal works are characterized an elongation of the human form and mask-like faces, and his work is so unlike any other of his time that it still defies classification. During his time, other artists emulated him by engaging in a self-destructive lifestyle, and today, his legacy lives on in nine novels, a play, a documentary, and three feature films.

Amedeo Clemente Modigliani (Italian pronunciation: [ameˈdɛːo modiʎˈʎaːni]; 12 July 1884 – 24 January 1920) was an Italian painter and sculptor who worked mainly in France. He is known for portraits and nudes in a modern style characterized by elongation of faces and figures, that were not received well during his lifetime, but later found acceptance. Modigliani spent his youth in Italy, where he studied the art of antiquity and the Renaissance until he moved to Paris in 1906. There he came into contact with prominent artists such as Pablo Picasso and Constantin Brâncuși.

Modigliani's œuvre includes paintings and drawings. From 1909 to 1914, however, he devoted himself mainly to sculpture. His main subject was portraits and full figures of humans, both in the images and in the sculptures. During his life, Amedeo Modigliani had little success, but after his death he achieved greater popularity and his works of art achieved high prices. He died at age 35 in Paris of tubercular meningitis.

Modigliani was born into a Sephardic Jewish family in Livorno, Italy. A port city, Livorno had long served as a refuge for those persecuted for their religion, and was home to a large Jewish community. His maternal great-great-grandfather, Solomon Garsin, had immigrated to Livorno in the 18th century as a refugee.

Modigliani's mother, Eugénie Garsin, born and raised in Marseille, was descended from an intellectual, scholarly family of Sephardic ancestry that for generations had lived along the Mediterranean coastline. Fluent in many languages, her ancestors were authorities on sacred Jewish texts and had founded a school of Talmudic studies. Family legend traced the family lineage to the 17th-century Dutch philosopher Baruch Spinoza. The family business was a credit agency with branches in Livorno, Marseille, Tunis, and London, though their fortunes ebbed and flowed.

Modigliani’s father, Flaminio, was a member of an Italian Jewish family of successful businessmen and entrepreneurs. While not as culturally sophisticated as the Garsins, they knew how to invest in and develop thriving business endeavors. When the Garsin and Modigliani families announced the engagement of their children, Flaminio was a wealthy young mining engineer. He managed the mine in Sardinia and also managed the almost 30,000 acres (12,141 ha) of timberland the family owned.

A reversal in fortune occurred to this prosperous family in 1883. An economic downturn in the price of metal plunged the Modiglianis into bankruptcy. Ever resourceful, Modigliani’s mother used her social contacts to establish a school and, along with her two sisters, made the school into a successful enterprise.

Amedeo Modigliani was the fourth child, whose birth coincided with the disastrous financial collapse of his father's business interests. Amedeo's birth saved the family from ruin; according to an ancient law, creditors could not seize the bed of a pregnant woman or a mother with a newborn child. The bailiffs entered the family's home just as Eugenia went into labour; the family protected their most valuable assets by piling them on top of her.

Modigliani had a close relationship with his mother, who taught him at home until he was 10. Beset with health problems after an attack of pleurisy when he was about 11, a few years later he developed a case of typhoid fever. When he was 16 he was taken ill again and contracted the tuberculosis which would later claim his life. After Modigliani recovered from the second bout of pleurisy, his mother took him on a tour of southern Italy: Naples, Capri, Rome and Amalfi, then north to Florence and Venice.