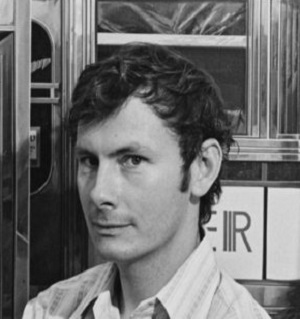 Richard Estes (born May 14, 1932 in Kewanee, Illinois) is an American artist, best known for his photorealist paintings. The paintings generally consist of reflective, clean, and inanimate city and geometric landscapes. He is regarded as one of the founders of the international photo-realist movement of the late 1960s, with such painters as John Baeder, Ralph Goings, Chuck Close, Audrey Flack, and Duane Hanson. Author Graham Thompson writes "One demonstration of the way photography became assimilated into the art world is the success of photorealist painting in the late 1960s and early 1970s. It is also called super-realism or hyper-realism and painters like Richard Estes, Denis Peterson, Audrey Flack, and Chuck Close often worked from photographic stills to create paintings that appeared to be photographs."


At an early age, Estes moved to Chicago with his family, where he studied fine arts at The School of the Art Institute of Chicago (1952–56). He frequently studied the works of realist painters such as Edgar Degas, Edward Hopper, and Thomas Eakins, who are strongly represented in the Art Institute's collection. After he completed his course of studies, Estes moved to New York City and, for the next ten years, worked as a graphic artist for various magazine publishers and advertising agencies in New York and Spain. During this period, he painted in his spare time. He had lived in Spain since 1962 and, by 1966, was financially able to paint full-time.


Estes stayed true to the photographs he used: when his paintings include stickers, signs, and window displays, they are always depicted backwards because of the reflection. His work rarely included litter or snow around the buildings because he believed these details detract from the buildings themselves. The paintings are always set during daylight hours, suggesting "vacant and quiet Sunday mornings." Estes's works strive to create convincing three-dimensionality on a two-dimensional canvas. His work has been described via a variety of terms, ranging from super-realism, sharp-focus realism, neo-realism, photo-realism, to radical realism. The most frequently used term is super-realism. Most of Estes's paintings from the early 1960s are of city dwellers engaged in everyday activities. Beginning around 1967, he began to paint storefronts and buildings with glass windows and, more importantly, the reflected images shown in these windows. The paintings were based on color photographs he took, which trapped the evanescent nature of the reflections, which would change with the lighting and the time of day.


Estes's paintings were based on several photographs of the subject. He avoided using famous New York landmarks. His paintings provided fine detail that were invisible to the naked eye, and gave "depth and intensity of vision that only artistic transformation can achieve."
While some amount of alteration was done for the sake of aesthetic composition, it was important to Estes that the central and the main reflected objects be recognizable, but also that the evanescent quality of the reflections be retained.
He had a one-man show in 1968 at the Allan Stone Gallery. His works have also been exhibited at the Metropolitan Museum of Art, the Whitney Museum, the Thyssen-Bornemisza, and the Solomon R. Guggenheim Museum. In 1971, Estes was granted a National Council for the Arts fellowship. The same year, he was elected into the National Academy of Design as an Associate member, and he became a full Academician in 1984.