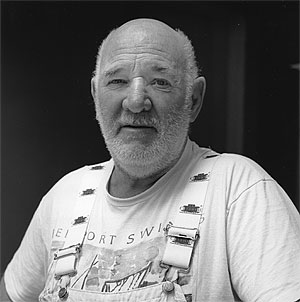 Malcolm Morley (born June 7, 1931) is an English artist now living in the United States. He is best known as a photorealist.

Morley was born in north London. He had a troubled childhood—after his home was blown up by a bomb during World War II, his family was homeless for a time—and did not discover art until serving a three-year stint in Wormwood Scrubs prison. After release, he studied art first at the Camberwell School of Arts and then at the Royal College of Art (1955–1957), where his fellow students included Peter Blake and Frank Auerbach. In 1956, he saw an exhibition of contemporary American art at the Tate Gallery, and began to produce paintings in an abstract expressionist style.

In the mid-1960s, Morley briefly taught at Ohio State University, and then moved back to New York City, where he taught at SUNY Stony Brook from 1970 through 1974 and the School of Visual Arts. In the early 1980s he was married to the Brazilian artist Marcia Grostein, who, during that short and intense period, had a significant influence on his work, especially on his well-known beach scenes watercolors. He now lives in Bellport, New York, in a former church that serves as his home/studio, which he has shared with his wife Lida Morley since 1986. His work was featured as the first temporary exhibit at the Parrish Art Museum in Watermill, New York, when it opened in November 2012.

In 1958, a year after leaving the Royal College, Morley moved to New York City, where he saw exhibitions of the work of Jackson Pollock and Balthus, both of whose treatment of their paintings' surfaces influenced him greatly. He considers Cézanne the quintessential sensationalist, and has acknowledged that artist's deep influence on his own work. When Morley moved to New York he also met Barnett Newman, and became influenced by him. He painted a number of works at this time made up of only horizontal black and white bands. He also met Andy Warhol and Roy Lichtenstein and, influenced in part by them, changed to a photorealist style (Morley prefers the phrase super realist). He often used a grid to transfer photographics images (often of ships) from a variety of sources (travel brochures, calendars, old paintings) to canvas as accurately as possible, and became one of the most noted photorealists.

In the 1970s, Morley's work began to be more expressionist, and he began to incorporate collage into his work. Many of his paintings from the mid-70s, such as Train Wreck (1975), depict "catastrophes". Later in the decade, he began to use his own earlier drawings and watercolours as the subject for his paintings. In 1984, Morley won the inaugural Turner Prize. In the 1990s he returned again to a more precise photorealist style, often reproducing images from model aeroplane kits on large canvases.

His work often draws upon various sources in a process of cross-fertilization. For example, his painting The Day of the Locust (1977) draws its title from the novel The Day of the Locust, by Nathanael West. One scene in the painting is drawn from the opening scene of the novel, and other scenes are drawn from the 1954 film Suddenly and the 1925 Sergei Eisenstein film Battleship Potemkin.