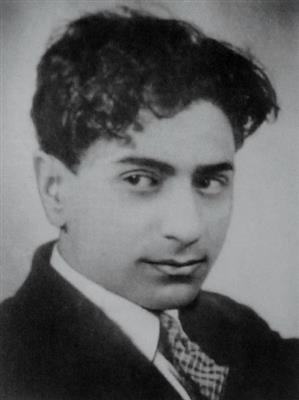 Georgian Modernist set and costume designer Petre Otskheli was undoubtedly an outstanding professional of his time. A great deal of his drawings were created for stage productions but the sophisticated nature of his sketches effortlessly turns them into autonomous masterpieces of graphic arts, imbued with independent aesthetic value. Critics speculate about why he decided to remain in theatre instead of becoming an independent artist. The answer is that theatre meant so much to him precisely because it allowed him to capture the figures of some of Georgia’s greatest artists and use them as models for his art.

Otskheli’s formative years coincided with the tremendous cultural movement flourishing at the beginning of the 20th century in Europe. A vital new culture known as ‘modernist’ art was being born. It gained force as it moved along opening up artists around the world to new artistic possibilities, leaving a profound mark also on leading artists in Georgia. These creative impulses were so powerful that it took years for the totalitarian Soviet ideology to suffocate them and they thrived until the late 1930s. For some reasons, film and theatre retained this drive longer than the other arts. The same is true in case of stage and costume design for theatre. Such luminaries of the Georgian artistic word as Irakli Gamrekeli, Soliko Virsaladze, Joseph Sumbatashvili, David Kakabadze, Elene Akhvlediani and others all channelled their considerable talents into theatre work.

Petre Otskheli (Georgian: პეტრე ოცხელი) (November 25, 1907 – December 2, 1937) was a Georgian modernist set and costume designer who designed in theatre in Georgia and briefly in Moscow. He was put to death during Joseph Stalin’s Great Purge at the age of 30, but his scenographic constructivism has had a lasting influence on the Georgian scenic design.

Born in Kutaisi, Otskheli studied at the Kutaisi realschule and the Tbilisi State Academy of Arts in the 1920s. Through most of his career Otskheli had a creative relationship with the director Kote Marjanishvili who invited the young artist to his theatre in Kutaisi in 1928. Otskheli’s visual experiments and skillful use of stage for massive designs with a series of subtle elements earned him recognition, but he soon came under pressure from Stalin’s lieutenant in the Caucasus, Lavrentiy Beria. In 1936, Otskheli fled Beria’s persecution to Moscow where he was recruited by his fellow countryman Sergo Amaghlobeli, then the director of Moscow Maly Theatre. In 1937, both Otskheli and Amaghlobeli were arrested and shot on trumped-up charges of treason.