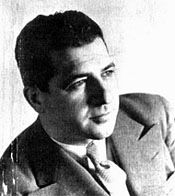 John Vassos (1898 – December 6, 1985) whose career as an American industrial designer and artist helped define the shape for radio, television, broadcasting equipment, and computers as the leading consultant designer for the Radio Corporation of America for almost four decades. He is best known today for both his art deco illustrated books and modern radios and televisions for RCA.

Vassos was born in Romania to Greek parents, and moved when young to Istanbul, Turkey, where he drew political cartoons for his father's newspaper. After serving in the British Naval Support Systems during World War I, he emigrated to Boston in 1919 where he attended the Fenway Art School at night. In 1924 he moved to New York, where he opened his own studio creating window displays, murals, and advertisements. He attended the Art Students League of New York, studying under George Bridgman, John Sloan, and others. He lived first on Barrow Street in bohemian Greenwich Village and became friends with photographer Margaret Bourke White, abstract painter Jimmy Ernst, and fellow Greek immigrant Nicholas John Cassavetes. Among his friends were intellectuals like Harry Hopkins who would join Franklin Delano Roosevelt’s Brain Trust, psychoanalyst Harry Stack Sullivan, and Edward Bernays, one of the first practitioners of public relations. He moved to the Silvermine neighborhood in Norwalk, Connecticut in the 1930s where he was an influential leader of the Silvermine Guild.

Between 1927–1935, Vassos also illustrated nine books, including Salome, Ballad of Reading Gaol, and The Harlot's House and Other Poems – three literary works by Oscar Wilde which were published by E.P. Dutton. Contempo (1929) written by his wife Ruth Vassos with images by Vassos is his first solo book and was met with great acclaim. Contempo is best understood as an exploration of American society during a moment of great transformation in which the American tempo is celebrated as a “a certain sharp staccato rhythm almost like a riveting machine that exists nowhere else in the world." The book also critiques the institutions of mass culture and commercial society. Ultimo presented a dystopic vision of a future underground society using streamlined motifs and was a response to debates about the urban landscape dominated by skyscrapers. Phobia was his most influential book – inspired by and dedicated to the Freudian psychoanalyst Harry Stack Sullivan. It reflects a modern landscape through the perspective of those who suffer from phobias.

In 1924, Vassos created his first industrial design, a lotion bottle popular as a hip flask during Prohibition. In 1933 he designed the widely popular Perey turnstile still used in many subway stations. Other notable designs included a streamlined paring knife, Hohner accordions, computers, an electron microscope for the RCA company, corporate logos, and shotguns. These highly functional and visually striking designs include major forms of media in the 20th century. His strengths in designing media tools for consumers and professionals alike set him apart from other industrial designers. Vassos designed numerous radios, phonograph players, the Constellation jukebox for the Mills Company, and total environments for movie theaters, international expositions, and restaurants. John Vassos’s contributions to public projects like the famous RCA Building for the 1939/1940 New York World’s Fair, have been overlooked for decades. John Vassos Consulting considered RCA, NBC, United Artists, Waterman Pens, Coca-Cola, Wallace Silver, Nedick’s, Mills Industries, and the United States Government among its scores of national clients.