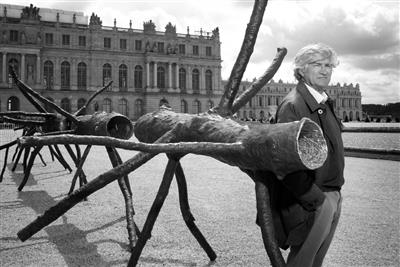 Giuseppe Penone (born 3 April 1947, Garessio, Italy) is an Italian artist and sculptor, known for his large-scale sculptures of trees that are interested in the link between man and the natural world. His early work is often associated with the Arte povera movement. In 2014, Penone was awarded the prestigious Praemium Imperiale award. He currently lives and works in Turin, Italy.


Giuseppe Penone was born on April 3, 1947 in Garessio, Italy. In 1970, he graduated from the Accademia Albertina in Turin, Italy, where he studied sculpture.


Penone's sculptures, installations, and drawings are distinguished by his emphasis on process and his use of natural materials, such as clay, stone, metal, and wood. His work strives to assimilate the natural word with his artistic practice, unifying art and nature. More specifically the tree, a living organism which closely resembles a human figure, is a recurring element in Penone's oeuvre. Penone created his first Albero ("Tree") sculpture in 1969, a series which continues to the present. Since this time, his practice has continued to explore and investigate the natural world and the poetic relationship between man and nature, artistic process and natural process.


In Penone's first exhibition at the age of 21, a one-man show at the Deposito d'Arte Presente in Turin in 1968, he presented works made out of lead, iron, wax, pitch, wood, plaster and burlap. Two of them involved the natural action of the elements: Scala d'acqua ("Water Ladder"), in which molten pitch was sculpted with a jet of water, and Corda, pioggia, zinco. Corda, pioggia, sole ("Rope, Rain, Sun"), a structure in movement with its form was altered by weathering.


In December 1968 Penone performed a series of acts in a wood near his home, the region of the Maritime Alps. In this work, titled Alpi Marittime, Penone intervened in the growth processes of a tree, whose form retained the memory of his gesture over time. One of his acts involved the flow of the waters in a stream, the vital sap which gives strength to the tree and on which the artist draws constantly in his work, a vehicle of growth and proliferation. He interlaced the stems of three saplings in Ho intrecciato tre alberi ("I Have Interwoven Three Trees") and uses nails to leave the imprint of his hand on the trunk of a tree and then affixed twenty-two pieces of lead to it, the number of his years, joining them up with zinc and copper wire: Albero/filo di zinco/rame ("Tree/Wire of Zinc/Copper). He enclosed the top of a tree in a net burdened by the weight of plants: Crescendo innalzerà la rete ("Growing It Will Raise The Net). He pressed his body to a tree and marked on the trunk the points of contact with barbed wire: L'albero ricorderà il contatto ("The Tree Will Remember the Contact").


In another of Penone's earliest experiments, Continuerà a crescere tranne che in quel punto ("It Will Continue to Grow Except at that Point") (1968), he inserted a steel cast of his hand in a tree trunk, forcing the tree to grow around his hand. He immersed in a stream a tub of cement with the dimensions of his body on which he had left the imprints of his hands, feet and face: La mia altezza, la lunghezza delle mie braccia, il mio spessore in un ruscello ("My Height, the Length of My Arms, My Breadth in a Stream").