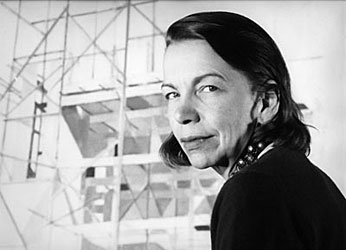 The Op Art movement refers to paintings and sculptures that use illusions or optical effects. Op art includes graphic elements and use of color that similarly appears in works from other movements such as Post Impressionism, Futurism, Constructivism, and Dadaism

Edna Davis Wright was born on January 25, 1917 in Portsmouth, Virginia. Between 1935-1936 Andrade studied at the Barnes Foundation in Merion, Pennsylvania. From the age of eight, she was encouraged to practice drawing and painting. In 1937 she attained a Bachelor of Fine Arts degree from the University of Pennsylvania. In 1938 she completed Post Graduate studies at the Pennsylvania Academy of Fine Arts.

While at the Pennsylvania Academy of Fine Arts, Andrade was awarded two Cresson Traveling Scholarships. While traveling post World War II, Andrade encountered the Bauhaus movement and other examples of German modernism. The artistic experimentation happening in Europe influences Andrade’s approach to design, color, and abstraction.

In 1941 she married architect Preston Andrade and they moved to Philadelphia in 1946, where she would remain for the rest of her life.

After her studies, Andrade taught art at an elementary school in Norfolk, Virginia. Subsequently, she taught at Tulane University in New Orleans. Upon her move to Philadelphia, she began teaching at The University of the Arts, where she taught for thirty years. In her early career she drafted on a freelance basis, but didn’t take charge of her career until her marriage ended.

Andrade’s early work includes water color collages and ink drawing of abstracted landscapes (an outpouring of art). During World War II, she worked on propaganda materials for what is now the CIA. Over the course of her career she created public artwork, commissioned by the Free Library of Philadelphia and the Salvation Army.

Andrade’s style of painting often produces hallucinatory compositions, psychedelic in appearance and often as if they are moving. Her paintings have no narrative, nor subject matter, which situate Andrade as an abstract artist. In an interview with the Philadelphia Inquirer, Andrade comments on her paintings, stating, “It’s not like showing your emotion. It’s a decision to be totally visual. A story doesn’t go with it.” As demonstrated by Andrade and her paintings, they are complex visual experiences, based in aesthetic experimentation rather than storytelling.