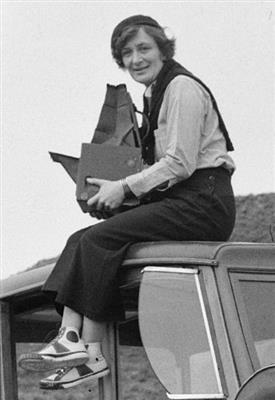 Dorothea Lange (born Dorothea Margaretta Nutzhorn; May 26, 1895 – October 11, 1965) was an American documentary photographer and photojournalist, best known for her Depression-era work for the Farm Security Administration (FSA). Lange's photographs influenced the development of documentary photography and humanized the consequences of the Great Depression.


Lange was born in Hoboken, New Jersey to second-generation German immigrants Johanna Lange and Heinrich Nutzhorn. She grew up on Manhattan's Lower East Side and attended PS 62 on Hester Street, where she was "one of the only gentiles—quite possibly the only—in a class of 3000 Jews." She had a younger brother, Martin.


Lange's father abandoned the family when she was 12 years old—the second severe trauma of her childhood. Later she dropped her father's family name and assumed her mother's maiden name. At age seven she had contracted polio, which left her with a weakened right leg and a permanent limp. "It formed me, guided me, instructed me, helped me, and humiliated me," Lange once said of her altered gait. "I've never gotten over it, and I am aware of the force and power of it."


Lange graduated from the Wadleigh High School for Girls, New York City; by this time, even though she had never owned or operated a camera, she had already decided that she would become a photographer. She began her study of photography at Columbia University under the tutelage of Clarence H. White, and later gained informal apprenticeships with several New York photography studios, including that of the famed Arnold Genthe.


In 1918, she left New York with a female friend intending to travel the world, but her plans were disrupted upon being robbed. She settled in San Francisco where she found work as a 'finisher' in a photographic supply shop; there she became acquainted with other photographers and met an investor who backed her in establishing a successful portrait studio. In 1920, she married the noted western painter Maynard Dixon, with whom she had two sons, Daniel, born in 1925, and John, born in 1930. Lange's studio business supported her family for the next fifteen years.


Lange's early studio work mostly involved shooting portrait photographs of the social elite in San Francisco. At the onset of the Great Depression, she turned her lens from the studio to the street. Her photographs during this period bear kinship with John Steinbeck's The Grapes of Wrath.


In the depths of the worldwide Depression, 1933, some fourteen million people in the U.S. were out of work; many were homeless, drifting aimlessly, often without enough food to eat. In the midwest and southwest drought and dust storms added to the economic havoc. During the decade of the 1930s some 300,000 men, women, and children migrated west to California, hoping to find work. Broadly, these migrant families were called by the opprobrium "Okies" (as from Oklahoma) regardless of where they came from. They traveled in old, dilapidated cars or trucks, wandering from place to place to follow the crops. Lange began to photograph these luckless folk, leaving her studio to document their lives in the streets and roads of California. She roamed the byways with her camera, portraying the extent of the social and economic upheaval of the Depression. It is here that Lange found her purpose and direction as a photographer. She was no longer a portraitist; but neither was she a photojournalist. Instead, she became known as one of the first of a new kind, a "documentary" photographer.