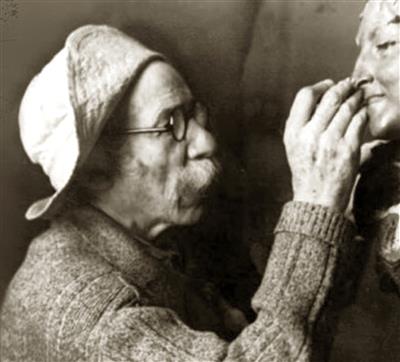 Mariano Benlliure (8 September 1862 – 8 November 1947) was a Spanish sculptor, who executed many public monuments and religious sculptures in Spain, working in a heroic realist style.


He was born in El Grau quarter of Valencia. His earliest sculptures featured bullfighting themes, modeled in wax and cast in bronze. At the age of thirteen he showed a wax modello of a picador at the Exposición Nacional de Bellas Artes, 1876. Pursuing the thought of becoming a painter, he went to Paris his expenses paid by his master, Francisco Domingo Marqués. A trip to Rome in 1879, revealing at first hand the sculptures of Michelangelo convinced him to be a sculptor. In 1887 he established himself permanently in Madrid, where in that year's Exposición Nacional his portrait sculpture of the painter Ribera won him a first-prize.


Benlliure's style is characterized by detailed naturalism allied to an impressionistic spontaneity. His portrait busts and public monuments are numerous, and include:


He was depicted on the Spanish 500 ptas banknote in the 1950s, with his sculpture "Sepulchro De Gayarre en el Roncal" on the reverse.


His brothers José and Juan Antonio were also painters.