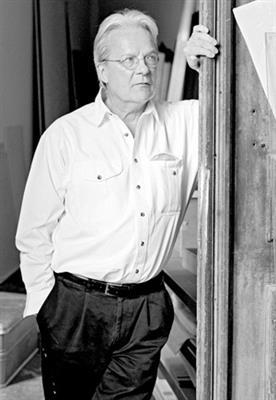 Imi Knoebel (born Klaus Wolf Knoebel; 1940) is a German artist. Knoebel is known for his minimalist, abstract painting and sculpture. The "Messerschnitt" or "knife cuts," are a recurring technique he employs, along with his regular use of the primary colors, red, yellow and blue. Knoebel lives and works in Düsseldorf.

Knoebel was born in Dessau, Germany, in 1940. From 1962–64 he studied at the Darmstadt "Werkkunstschule", in a course based on the ideas of the pre-Bauhaus course taught by Johannes Itten and László Moholy-Nagy. From 1964 to 1971, he studied under Joseph Beuys at the Kunstakademie Düsseldorf with fellow students Blinky Palermo (with whom he shared a studio), Jörg Immendorff, Ivo Ringe and Katharina Sieverding.

Knoebel's work explores the relationship between space, picture support and color. The style and formal concerns of his painting and sculpture have drawn comparisons with the high modernist principles of both Kazimir Malevich and the Bauhaus

Between 1966 and 1969, Knoebel worked on a series of "Linienbildern", or line paintings, encompassing 90 panels Another series of 250,000 "Linienbilder" drawings were done on DIN A4 sheets in the years between 1969 and 1973/75. In 1968 Knoebel created his first major work, an installation with a variety of geometrical objects called Raum 19, named after classroom No. 19, which Beuys had given to his students at the academy. Raum 19 comprises seventy-seven components made from wood and Masonite, including painting stretchers, both assembled and in pieces; large constructions of stretchers with untreated Masonite attached as picture planes; and larger cubic volumes and curved blocks that resemble sections of an arched window or door frame.

Beginning in 1968, Knoebel was one of the first Beuys students to use photography as an independent artistic medium. For his Innenprojektionen (Interior Projections; 1968–1970) black-and-white photographs, he started using empty slide projections, creating empty squares of light, projected on a wall or in a darkened, closed-off room. This later evolved to his placing slides covered in copy ink with precisely carved vertical and horizontal lines into the projector and then cast throughout the room. Projecting these lines at various angles throughout a darkened space, at windows, corners, wall fittings and architectural irregularities, offered limitless possibilities for the artist. Knoebel documented these light projections with his camera and displayed the variations in large grids, often with as many as 80 photographs comprising a single work. Knoebel’s 1968 Projektion 1, is a series of luminous, disorienting black-and-white photographs of light projections that bring to mind the architectural slicings that Gordon Matta-Clark was conducting at that time. Projection X (1970–71) and Projektion X Remake (2005), two versions of the same video concept, are his only videotapes based on these outdoor projections. During a nocturnal drive through the sleeping city of Darmstadt, a large, luminous X-shaped beam of light is projected from the vehicle onto the walls of buildings.

From the mid-1970s on, Knoebel then turned towards a gestural use of color on layered plywood boards or metal plates. From 1975 to date, Knoebel has been working on overlapping coloured rectangles called "Mennigebilder" ("Red Lead Pictures"), named after an anti-corrosion paint used in steel construction by the name of Mennige Paint, which the artist has used in these works. Whereas in his early years his palette was reduced to white, black, and brown, since 1977 he has been producing works with more color. His painting has since been characterized by a gesturally expressive application of colour on panels of layered plywood and metal placed in specific spatial relation. In the 1980s, Knoebel continued his associative loading of geometricizing picture elements and started to focus on the portrait. The arrangement of three, in colour nuanced vertical rectangulars next to and between two horizontal rectangulars is Knoebel’s formal solution for depicting the notion ‘portrait’.