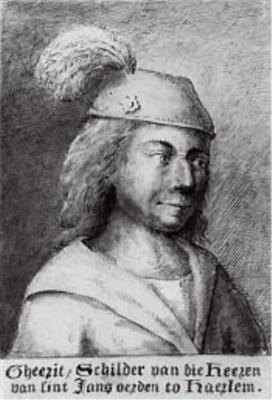 Geertgen tot Sint Jans (c. 1465 – c. 1495), also known as Geertgen van Haarlem, Gerrit van Haarlem, Gerrit Gerritsz, Gheertgen, Geerrit, Gheerrit, or any other diminutive form of Gerald, was an Early Netherlandish painter from the northern Low Countries in the Holy Roman Empire. No contemporary documentation of his life has been traced, and the earliest published account of his life and work is from 1604, in Karel van Mander's Schilder-boeck.


According to van Mander, Geertgen was probably a pupil of Albert van Ouwater, one of the first oil painters in the northern Low Countries. Both painters lived in the city of Haarlem, where Geertgen was attached to the house of the Knights of Saint John, perhaps as a lay brother, for whom he painted an altarpiece. In van Mander's book he states that Geertgen took the name of St. John without joining the order, thus his last name "tot Sint Jans" was derived from the order's name and means "unto Saint John".


Though van Mander calls him Geertgen tot Sint Jans, painter from Haarlem, indicating he was from Haarlem, it is possible that he was perhaps born in Leiden, then in the Burgundian Netherlands in the Holy Roman Empire, around the year 1465. The assignment of Leiden as his birthplace is traceable to a 17th-century print by Jacob Matham, where he is referred to as Gerardus van Leydanus. There is no known archival evidence for this claim by Matham. This print of The Lamentation of Christ from 1620, shows in the lower left corner "Cum privil. Sa Cae. M. – Gerardus Leydanus Pictor ad S. Ia Bapt. Harlemi pinxit" indicating he was a painter from Leiden at St John the Baptist in Haarlem. In the lower right hand corner it says "Theodorus Matham Sculpsit. Iac Matham excud.", which means that son Theo made the sketch from the painting, and father Jacob Matham engraved it. It was printed in Haarlem in 1620, indicating that the painting was still there at that time. According to van Mander, this painting of the Lamentation was originally on the inside right door of a wood-panel triptych for the high altar of the St. John's church in Haarlem, and the two side panels were sawed off from the central panel into two separate paintings after the Protestant Reformation. Both side panels are quite fragile and are located in separate museums today. Modern acceptance of Leiden as Geertgen's birthplace is roughly traceable to Johann Kessler's dissertation of 1930.


He died, probably still in his twenties, around the year 1495, in Haarlem, where he was buried in the commandry. Modern scholars have attempted to calculate the artist's death date with the information from The Painting-Book (Middle Dutch: Het Schilder-boeck) by Karel van Mander, published in 1604. The reconstruction of Geertgen's active dates has recently been done by Kemperdick and Sander in 2007 stating:


In the 14th century Haarlem was a major city. It was the second largest city in historical Holland after Dordrecht and before Delft, Leiden, Amsterdam, Gouda and Rotterdam. In 1429 the city gained the right to collect tolls, including ships passing the city on the Spaarne river. At the end of the Middle Ages Haarlem was a flourishing city with a large textile industry, shipyards and beer breweries.