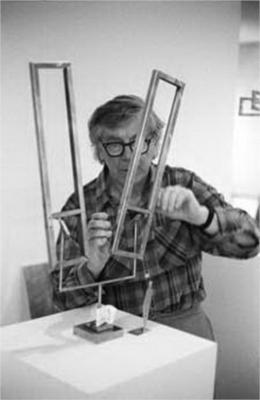 Rickey was born on June 6, 1907 in South Bend, Indiana. At a 1985 retrospective show, he later recalled that as a very small child, he was fascinated by the window latches in his home. These latches, which can be found in many historic South Bend homes, operate conically at counter-intuitive angles that are oblique to the "apparent" design of the otherwise rectilinear form of the latch. "One expects the latch to open by pulling, but it's a conical crank, you see." This conical, oblique design shows up in many of George Rickey's works, where the axes of motion give unexpected movement to the rectilinear forms of his work.

When Rickey was still a child, his father, an executive with Singer Sewing Machine Company, moved the family to Glasgow, Scotland in 1913. They lived near the river Clyde, and George learned to sail around the outer islands on the family's 30 feet (9.1 m) sailboat.

Rickey was educated at Glenalmond College and received a degree in History from Balliol College, Oxford, with frequent visits to the Ruskin School of Drawing. He spent a short time traveling Europe and, against the advice of his father, studied art in Paris at Académie L'Hote and Académie Moderne. He then returned to the United States and began teaching at the Groton School, where among his many students was future National Security Advisor McGeorge Bundy.

After leaving Groton, Rickey worked at various schools throughout the country as part of the Carnegie Corporation Visiting Artists/Artists in Residence program (partially funded by the Works Progress Administration). His focus was primarily on painting. While taking part in these programs, he painted portraits, taught classes, and created a set of murals at Knox College, Galesburg, Illinois. He maintained an art studio in New York from 1934 to 1942, when he was drafted.

Rickey's interest in things mechanical re-awakened during his wartime work in aircraft and gunnery systems research and maintenance. Following his discharge, he studied art at the New York University Institute of Fine Arts and later at the Chicago Institute of Design, funded by the G.I. Bill. He taught art at variety of colleges, including Muhlenberg College. While at Muhlenberg, he was commissioned by J. I. Rodale to illustrate an edition of Anton Chekhov's The Beggar and Other Tales. Rickey later moved on to Indiana University South Bend. There, he encountered and was inspired by the work of David Smith.

Rickey turned from painting to creating kinetic sculpture. Rickey combined his love of engineering and mechanics by designing sculptures whose metal parts moved in response to the slightest air currents.

His first sculpture was shown in New York in 1951 at the Metropolitan Museum of Art group show American Sculpture 1951. The Museum of Modern Art, in New York purchased his seminal Two Lines Temporal I, after Alfred Barr, MOMA's then Director, had seen it at the exhibition Documenta III in Kassel, Germany.

Rickey's sculptures can now be seen in major museums in the US and in most European capitals, Japan, and New Zealand. Rickey's work is often compared to the mobiles of Alexander Calder, but while Calder used organic, playful forms, Rickey's European lineage is more closely related to the Constructivist principles of geometric engineering. In 1967, Rickey wrote Constructivism – origins and evolution, published by George Braziller, Inc., New York.