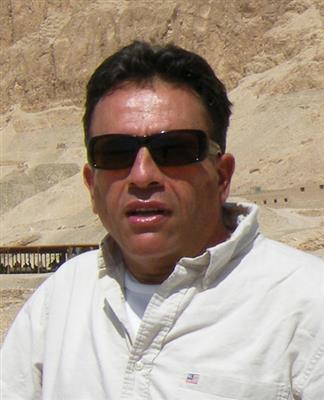 Carlos Lagos at Valley of the Kings, Egypt

He paints in order to convey his instinctive urges to create meaningful paintings. His passion is to invent imagery and bring it to the realm of reality with his works on canvas, board or cardboard.

Using paints as his preferred medium, he relates his narrative and creative vision of the places that exist in his mind as memories... or, from his imagination.

His thoughts, concepts about life are communicated through his gestural and brash strokes of paint on any given surface. Lagos sets his aesthetics views within the context of imagination and freedom.
​
Be it on a corrugated piece of cardboad, canvas or masonite, his works are composed of paint that intertwined on a single surface results as an expressive, relevant image.

He paints instinctively, until the right image appears on his medium of choice. He allows music, and the materials on which he paints to guide and inspire as he composes and creates his paintings. His paintings are impacted by his life experience and travels.

Lagos has been painting imagery for the last thirty-five years of his life. His vibrant works are a reflection his love for the art movements known as Impressionism and Expressionism which figure prominently in shaping the aesthetics that influence his creations.

Born in San Salvador, El Salvador on July 4 1954, Lagos was to leave his native land at twelve years of age. In 1966 his immediate family relocated to the U.S.A. Where he became a citizen at age eighteen and served honorably in the United States Air Force in 1974.

Growing up in close proximity to Washington, D.C. his love of art grew tremendously. While still in high school, a young Lagos would surreptitiously spend school days admiring paintings at The National Gallery of Art, or ancient works of art at The Freer Gallery of The Smithsonian Institution in the nation’s capital.

Photography, his first art discipline is of influence in his paintings. Painting, as an expression of art was cultivated during his teenage years. Visiting museums and art galleries, or just absorbing everyday life while visiting in Paris, Amsterdam or Madrid.

The travels, the travails in the course of his lifetime have abetted his conviction that life is art. His desire to share this vision and outlook on art is now, more than ever an important endeavor in his life. For Lagos, art and time in this world are of the essence in his life.