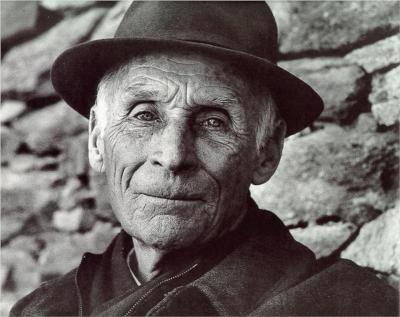 Bram (Abraham Gerardus) van Velde (19 October 1895 in Zoeterwoude, near Leiden, Netherlands – 28 December 1981 in Grimaud, near Arles, France) was a Dutch painter known for an intensely colored and geometric semi-representational painting style related to Tachisme, and Lyrical Abstraction. He is often seen as member of the School of Paris but his work resides somewhere between expressionism and surrealism, and evolved in the 1960s into an expressive abstract art. His paintings from the 1950s are similar to the contemporary work of Matisse, Picasso and the abstract expressionist Adolph Gottlieb. He was championed by a number of French-speaking writers, including Samuel Beckett and the poet André du Bouchet.

Bram van Velde was born into an intensely poor family, and this would mark him profoundly for life. His mother, Catharina von der Voorst (1867–1949) was the illegitimate daughter of a Count. His father, Willem van Velde (1868–1914), owned a small company in water transportation on the Rhine. Bram was the second of four children (his sister Cornelia was born in 1892, Geer and Jacoba were born in 1898 and 1903). After going bankrupt, the father abandoned the family; the mother and children moved repeatedly over the next years, from Leyden to Lisse, and finally to The Hague.

In 1907, the young Bram entered into service as an apprentice in the painting and interior decorating company of Schaijk & Kramers in The Hague. He was encouraged in his art by the co-owner Eduard H. Kramers and his son Wijnand, who were appreciators and collectors of art, and these two would become Bram van Velde's artistic patrons until around 1934. Because of his status as bread-winner for his family, Bram van Velde was exempted from service in the First World War, and he was able to continue his work as a painter and decorator, and to enroll in the Mauritshuis of The Hague, where he was able to copy masterworks in the collection.

In 1922, the Kramers encouraged van Velde to travel and gave him a monthly stipend. He went first to Munich in May, then to north of Bremen (in Worpswede) in June, where, since the 1890s, there existed a colony of expressionist artists. This brief exposure to contemporary art (3 months) revolutionized van Velde's work. He left Worpswede shortly after, and moved to Paris (in the "Belleville" quartier, 19th arrondissement). His career progressed slowly, and in February 1927 he exposed his works in Bremen. This was followed by the Jury-Freie Kunstschau of Berlin in April. Finally, he (with his brother Geer) was admitted into the Salon des Indépendants in Paris, where he would show his works several times (1928 to 1932, in 1940 and 1941). In this period he went to Chartres in the company of Otto Freundlich, and also discovered the works of Henri Matisse (probably at the home of Paul Guillaume). Matisse would have a great impact on van Velde's work (as too, in coming years, van Velde's discovery of Pablo Picasso).