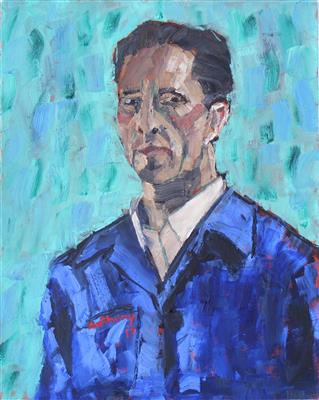 The Self Portrait is part of Anthony David Padgett's year long study of Vincent Van Gogh (which resulted in Padgett's sculpture of Van Gogh being sited in 7 key places around Europe).

Anthony Padgett is a writer, artist, coach and dance teacher with an MA in the Theory of Contemporary Art. He has published papers and books and has given numerous talks at galleries and universities. His art has featured on national radio and national press.

1990 – 1997. Anthony studied Philosophy before teaching Religious Education and then becoming a London based sculptor and stone conservator. He then worked for the British School of Archaeology in Jerusalem, the Israeli Antiquities Authority and the Palestinian Department of Antiquities (running a 6 month project for the conservation of a 4th century church at Burqin). On returning to the UK he worked as a computer illustrator with Lancaster University Archaeological Unit and became an intern in Washington DC with the Historic American Buildings Survey.

1998 – 2016. Anthony published 4 novels, a biography, collections of academic essays, a compilation of poetry, a book of short stories, a guide on how to run dance classes, photographic documentaries about his artwork and an illustrated children’s book.

He organised a large number of art and trade exhibitions in London, Manchester and Birmingham whilst studying for an MA and working as an administrator. He won an international art competition in 2002 and was a finalist in the International Jewish Artist of the Year Awards 2004. He gave talks at the Studio Art School in New York, at the Institute of Contemporary Art in London and at Tate Modern.

His award winning “Millennium-Angel” sculpture was the result of £150,000 sponsorship and was sited at Leighton Hall, Lancashire, (www.millennium-angel.co.uk) in 2008.

In 2013 he was sculptor and project manager for the Praying Shell sculpture at Morecambe Bay coastline. In 2015 he created and sited 5 busts of the poet and civil servant Humbert Wolfe in London, Oxford, New York and Bradford.

In 2016 he had an artist residency with the Museum of Lancashire and created a bust of First World War poet Wilfred Owen which is sited in France, Edinburgh, Scarborough Art Gallery, Oxford University and other sites.

In 2017 he gained and artist residency with the Birley Gallery and has created an award winning bust of Vincent Van Gogh, 7 of which have been sited at venues across Europe including Brixton (UK), Ramsgate (UK) and Arles (France).

In a year, from 2018-2019, Anthony created a body of 100 oil paintings at Ascot Studios, Ribchester, looking at the life and work of Pablo Picasso.

Anthony’s studio is now at the Birley Studios in Preston.