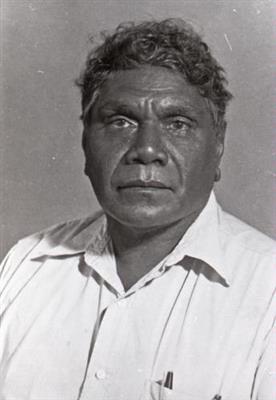 
A member of the Western Arrernte people, Namatjira was born and raised at the Hermannsburg Lutheran Mission outside Alice Springs. He showed interest in art from an early age but it was not until 1934 (aged 32) and under the guidance of Rex Battarbee that he began to paint seriously. Namatjira's richly detailed, Western art-influenced watercolours of the outback departed significantly from the abstract designs and symbols of traditional Aboriginal art, and inspired the Hermannsburg School of painting. He became a household name in Australia and reproductions of his works hung in many homes throughout the nation. As the first prominent Aboriginal artist to work in a western idiom, at the time he was widely regarded as representative of successful assimilation policies; however, later re-evaluation of his work showed that he combined many elements of traditional culture and art in his work.


Namatjira was the first Northern Territory Aboriginal person to be freed from restrictions that made Aboriginal people wards of the State, when in 1957, he was granted restricted Australian citizenship, giving him the right to vote, have limited land rights and buy alcohol. In 1956 his portrait, by William Dargie, became the first of an Aboriginal person to win the Archibald Prize. Namatjira was also awarded the Queen's Coronation Medal in 1953, and was honoured with an Australian postage stamp in 1968.


He was born at Hermannsburg Lutheran Mission, Ntaria, near Alice Springs in 1902, the son of Namatjira and Ljukuta. They were Western Arrernte people.


Namatjira was raised on the Hermannsburg Mission and baptised after his parents' adoption of Christianity. He was born as Elea, but once baptised, they changed his name to Albert. As a child, he sketched what he saw around him. After a western-style upbringing on the mission, including attending the school and living in a dormitory, separated from his parents, at the age of 13 Namatjira returned to the bush for initiation and was exposed to traditional culture and initiated as a member of the Arrernte community (in which he was to eventually become an elder).


When he was 18 years old, he left the mission and married his wife Ilkalita, a Kukatja woman, who was christened Rubina upon their return to Hermannsburg. They had five sons and three daughters.


His wife, like his father's wife, was from the wrong skin group and he violated the law of his people by marrying outside the classificatory kinship system. In 1928 he was ostracised for several years in which he worked as a camel driver and saw much of Central Australia, which he was later to depict in his paintings. He also worked as a blacksmith, carpenter and stockman, at the mission and at the surrounding cattle stations.


Namatjira was introduced to western-style painting through an exhibition by two painters from Melbourne, Rex Battarbee and John Gardner, at his mission in 1934. Battarbee returned to the area in the winter of 1936 to paint the landscape, and Namatjira, expressing an interest in learning to paint, acted as his cameleer and guide to show him local scenic areas. Battarbee showed him how to paint with watercolours.