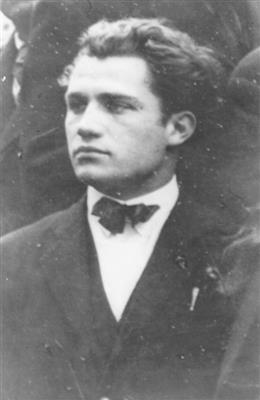 Antonio Sicurezza (February 25, 1905 – August 29, 1979) was an Italian painter. His work is representative of the Italian figurative art of that period. His artistic production includes still lives, portraits, landscapes, nudes, and altar pieces.


Born at Santa Maria Capua Vetere, Sicurezza studied at the Academy of Fine Arts in Naples, winning a scholarship to fund his studies. He obtained a diploma in painting training under masters such as Carlo Siviero, Vincenzo Volpe, Vincenzo Migliaro and Paolo Vetri.


He moved to Formia in 1933–1934, when he was called to paint the chapel of St. Anthony in the church of Maranola. Here he met Virginia Mastrogiovanni whom he married in 1934.


In the hardest times of World War II he, his wife, and their four children, fled first into the mountainous caves in Coreno Ausonio, then through the warfront to Calabria. After the war, the family returned to Formia.


The war had destroyed and damaged the churches in the area, which held many of Sicurezzi's work. Among them were Angeli musicanti (Angels Playing Music), a fresco he painted for the chapel of Our Lady of Pompei and two oval portraits of Pope Leo XIII and Blessed Bartolo Longo.


The search for new altar pieces, replacing the ones destroyed, it is not easy for both the difficult economic situation and the clergy that requires religious representations in line with the traditional iconography, which the artist sometimes agrees not to foreclose future commissions.


When Antonio Sicurezza could finally express himself more freely, he had artistically valuable results, such as the works of the apse of St. John, St. Albina in the church of Saint Erasmus, and then, above all, the paintings of St. Francis and of the Annunciation at the church of Our Lady of Carmine and that of Saint Roch in Pico. It is valuable to note that the landscape behind the figures is represented in a deliberately simple manner, so that the faithful can recognize immediately the local sights and monuments, as in St. Albina and in St. Francis, in which it is particularly significant the view of the large Gaeta gulf.


In the summertime he worked outside to paint landscapes and alleys, while during the rest of year he worked in his studio mainly with charcoal and watercolors or tempera. He produced sketches and studies for religious themes or he painted still lives with immediacy and lightness.


After the summer of 1965 he left teaching and set up the large study that, among carob trees and prickly pears, he had built on the land of Santa Maria la Noce. It was now easier to prepare sketches and large cartoons for religious works and then – limiting the charcoal and pastel studies – he could systematically focus on oil painting, especially of the human figures and still lives.


In fact the style change, which made him prefer oil painting and saw the use of systematic and almost exclusive spatula instead of a brush, occurred in the late Fifties. Some of the paintings exhibited in Rome in July 1961, including two paintings that were awarded to the contemporary art exhibition held in Turin in the context of the events of Italy '61, already put in evidence the use of the spatula to illustrate the human figure and objects.