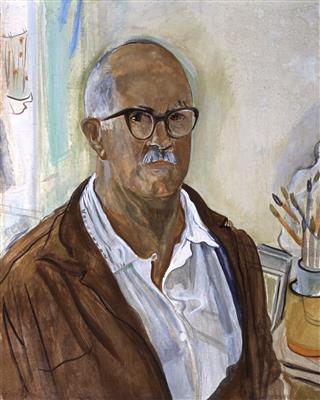 
Guignard was born in Nova Friburgo, in the state of Rio de Janeiro. He was born with a cleft lip and palate. Guignard's father died when he was a child and his mother remarried, to German baron Friedrich von Schilgen. Therefore, they moved to Germany.


In Europe, Guignard studied painting from 11 to 33 years old. Guignard attended the Academy of Fine Arts in Munich, where he studied with Herman Groeber and Adolf Engeler and visited Florence.

After he returned to Brazil in 1929, he became an example of Brazilian Modernist painting, alongside Candido Portinari, Ismael Nery and Cícero Dias.

He became mentor of painters such as Iberê Camargo, Vera Mindlin and Alcides da Rocha Miranda. In 1944, Guignard was invited by Juscelino Kubitschek, then mayor of Belo Horizonte, to establish a program for drawing and painting at the newly created Instituto de Belas Artes (now the Guignard University of Art of Minas Gerais). He lived in Belo Horizonte until his death, in 1962.


Guignard had several exhibitions in Brazil. In 1953, he was honored with a retrospective in the Museu de Arte Moderna do Rio de Janeiro and, in 1992, at the Museu Lasar Segall.


His body was buried in the São Francisco de Assis Church, in Ouro Preto.


In August 2015, his painting Vaso de Flores was sold for R$5.7 million, becoming the most expensive work of art by a Brazilian artist ever auctioned.