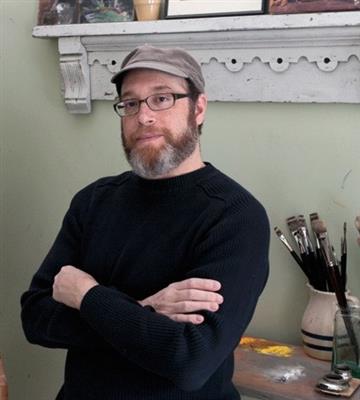 Vincent Giarrano was born on 17 November, 1960 in Buffalo, New York. He took an early interest in drawing and by the time he was 12, the choice had been made.

He went on to complete his BFA from The State University of New York in 1982 and an MFA from Syracuse University in 1985. Subsequently, he pursued a career in Marvel Comics and DC Comics among others as an illustrator. He credits his years’ of experience of drawing comic books to developing a sense of the narrative structure.

Around 2000, Vincent again started to take an active interest in Fine Arts, particularly in realist painting. He meticulously studied the works of John Singer Sargent, attended workshops and painted with friends. From the middle of the decade his works started to appear in Group and Solo Exhibitions fairly frequently. His works have been exhibited in National Portrait Gallery, Smithsonian Institution, Washington DC and National Portrait Gallery, London.

Vincent loves painting the ubiquitous experiences from everyday lives. To him, these fleeting moments can carry something of infinite significance. It is also of extreme importance for him to effectively capture the light and create a moody atmosphere.

Besides John Singer Sargent, other painters like Joaquín Sorolla, Anders Zorn and Edward Hopper impress him deeply. The enormous courage and sincere commitment of the Dutch Post-Impressionist painter Vincent van Gogh move him to the core.