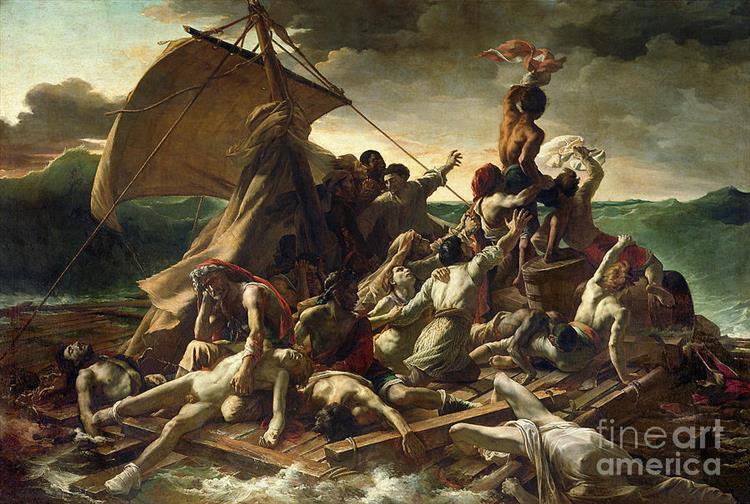 The Raft of the Medusa

The epic painting The Raft of the Medusa features a gruesome mass of figures afloat at sea, some dead, some struggling for life, in a tangled mass positioned on a crudely-made raft. The only African figure on the raft waves a cloth at the top of a pile of a few men who are struggling to get the attention of a ship in the distance (located on the far right of the horizon line). The sail of the raft is billowing in the wind while being tossed about a choppy ocean beneath a stormy sky. Géricault paid great attention to the details in this work. He even sketched severed body parts in order to make the image as authentic as possible.

The subject depicted is the artist's dramatic interpretation of the events beginning on July 2, 1816, when a French navy frigate crashed on its way to colonies in West Africa. The appointed governor of the colony and the top-ranking officers in the party left on the ship's six lifeboats leaving the remaining 147 passengers to be crowded onto a hastily made raft. When the raft proved too cumbersome, in a horrific act of cowardice and fear, the ship's leader cut the ropes to the raft. Left to fend for themselves for 13 days, the passengers eventually resorted to cannibalism. When rescued by a passing British ship, only 15 men were left alive, of whom 5 died before they were able to reach land. When the public learned of this, it became an international tragedy and a searing indictment of the current French government.

The decision to paint a scene from contemporary history - one that was utterly of the moment - brought instant attention to this work, particularly as Gericault translated it in a manner befitting classical history painting (large-scale, with heroic and tragic elements). The painting shocked the public and divided critics at the 1819 Salon. The shipwreck had scandalous political implications at home—the incompetent captain, who had gained the position because of connections to the Bourbon Restoration government, fought to save himself and senior officers while leaving the lower ranks to die—and so Géricault’s picture of the raft and its inhabitants was greeted with hostility by the government. Critics were divided: the horror and "terribilità" of the subject exercised fascination, but devotees of classicism expressed their distaste for what they described as a "pile of corpses," whose realism they considered a far cry from the "ideal beauty" incarnated by Girodet's Pygmalion and Galatea (1819) which triumphed the same year. Géricault's work expressed a paradox: how could a hideous subject be translated into a powerful painting, how could the painter reconcile art and reality? Coupin (art critic of the Revue encyclopédique) was categorical: "Monsieur Géricault seems mistaken. The goal of painting is to speak to the soul and the eyes, not to repel."

Disappointed by the reception of The Raft of the Medusa, Géricault took the painting to England in 1820, where it was received as a sensational success. He remained there for two years, enjoying the equine culture and producing a body of lithographs, watercolors, and oils of jockeys and horses.

This work is a key example of Romantic painting. In creating it, Géricault showed a complexity of composition and an almost unsettling portrayal of reality, differed from anything that had been seen before. Delacroix's Liberty Leading the People (1830) borrows heavily from the style and composition while contemporary artists, including Frank Stella, Peter Saul, and Jeff Koons, have taken direct inspiration from this work, which has achieved the status of an artistic icon.

The Raft of the Medusa (French: Le Radeau de la Méduse [lə ʁado d(ə) la medyz]) is an oil painting of 1818–1819 by the French Romantic painter and lithographer Théodore Géricault (1791–1824). Completed when the artist was 27, the work has become an icon of French Romanticism. At 491 cm × 716 cm (16' 1" × 23' 6"), it is an over-life-size painting that depicts a moment from the aftermath of the wreck of the French naval frigate Méduse, which ran aground off the coast of today's Mauritania on 2 July 1816. On 5 July 1816, at least 147 people were set adrift on a hurriedly constructed raft; all but 15 died in the 13 days before their rescue, and those who survived endured starvation and dehydration and practised cannibalism. The event became an international scandal, in part because its cause was widely attributed to the incompetence of the French captain.

Géricault chose to depict this event in order to launch his career with a large-scale uncommissioned work on a subject that had already generated great public interest. The event fascinated him, and before he began work on the final painting, he undertook extensive research and produced many preparatory sketches. He interviewed two of the survivors and constructed a detailed scale model of the raft. He visited hospitals and morgues where he could view, first-hand, the colour and texture of the flesh of the dying and dead. As he had anticipated, the painting proved highly controversial at its first appearance in the 1819 Paris Salon, attracting passionate praise and condemnation in equal measure. However, it established his international reputation, and today is widely seen as seminal in the early history of the Romantic movement in French painting.

Although The Raft of the Medusa retains elements of the traditions of history painting, in both its choice of subject matter and its dramatic presentation, it represents a break from the calm and order of the prevailing Neoclassical school. Géricault's work attracted wide attention from its first showing and was then exhibited in London. The Louvre acquired it soon after the artist's death at the age of 32. The painting's influence can be seen in the works of Eugène Delacroix, J. M. W. Turner, Gustave Courbet, and Édouard Manet.

In June 1816, the French frigate Méduse departed from Rochefort, bound for the Senegalese port of Saint-Louis. She headed a convoy of three other ships: the storeship Loire, the brig Argus and the corvette Écho. Viscount Hugues Duroy de Chaumereys had been appointed captain of the frigate despite having scarcely sailed in 20 years. After the wreck, public outrage mistakenly attributed responsibility for his appointment to Louis XVIII, though his was a routine naval appointment made within the Ministry of the Navy and far outside the concerns of the monarch. The frigate's mission was to accept the British return of Senegal under the terms of France's acceptance of the Peace of Paris. The appointed French governor of Senegal, Colonel Julien-Désiré Schmaltz, and his wife and daughter were among the passengers.