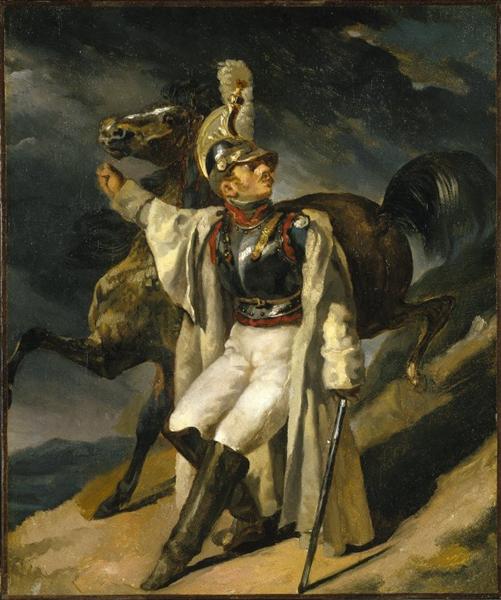 The Wounded Cuirassier (French: Le Cuirassier blessé quittant le feu) is an oil painting of a single anonymous soldier descending a slope with his horse by the French Romantic painter and lithographer Théodore Géricault (1791–1824). In this 1814 Salon entry, Géricault decided to depict a different view of battle than the generally done views of entire battles or of famous generals bravely fighting. On display just a few months after Napoleon's fall from power, this life-size painting symbolized the French defeats and Napoleon's failure. Though the painting is called The Wounded Cuirassier, there are no visible wounds on the soldier. Additionally, though Géricault generally created several drafts before settling on a final design, there do not seem to be any paintings of his that could be considered precursors to this painting. Only his Signboard of a Hoofsmith, which is currently in a private collection, bears any resemblance in form or function to this painting.


The two known copies of the painting are at the Musée du Louvre and at the Brooklyn Museum.