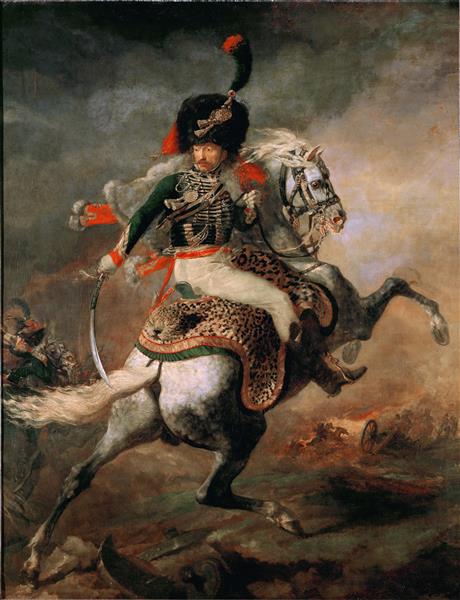 Officer of the Chasseurs Charging on Horseback (Charging Hussar)

As reflected in the title, Géricault's Charging Chasseur is a large-scale portrait featuring an officer in the French Imperial Guard charging away from the viewer. In the background, a battle scene suggests that retreat is underway. The officer is a real-life figure, Alexandre Dieudonné, who was a friend of the artist. He is depicted twisting backward, sword ready, in a dramatically contorted pose.

Military figures were among the artist's favorite themes, with this being one of his earliest and yet most important examples. The work also utilizes another favored subject of the artist, the horse, which he returned to throughout his career. The scene Géricault chose to depict is not a moment of military victory, as was commonly represented by the Neoclassical artists of the period. Everything in the narrative implies that the battle is about to be lost. The officer seems to look back in sad resignation. Instead of an idealized scene created using Ancient Roman or Greek motifs, as was common in the French Neoclassical style, Géricault chose to depict a romanticized scene full of drama. The tension is enhanced by bold color choices and varied light effects. His depiction reinforces the Romantic idea of the hero who, rather than seen triumphing, is shown struggling, brooding, or sad in the face of uncertain fate.

The choice of the subject could be seen as slightly ironic, given that his father had found a way to get him out of military service. Perhaps the work was an attempt to give visual form to the military drama that Géricault so admired but had not yet seen first hand. Whatever the work's motivations, it helped to launch Géricault's career and was well-received when it was exhibited at the 1812 Paris Salon.

The Charging Chasseur, or An Officer of the Imperial Horse Guards Charging is an oil painting on canvas of about 1812 by the French painter Théodore Géricault, portraying a mounted Napoleonic cavalry officer who is ready to attack. The painting represents French romanticism and has a motif similar to Jacques-Louis David's Napoleon Crossing the Alps, but non-classical characteristics of the picture include its dramatic diagonal arrangement and vigorous paint handling. In The Charging Chasseur, the horse appears to be rearing away from an unseen attacker. The painting was Géricault's first exhibited work. Géricault would continue to move away from classicism, as exemplified in his masterpiece The Raft of the Medusa (1818–19).

The turning figure on a rearing horse is derived from the large early Rubens Saint George (Museo del Prado, 1605–07), though there the view is from the side.