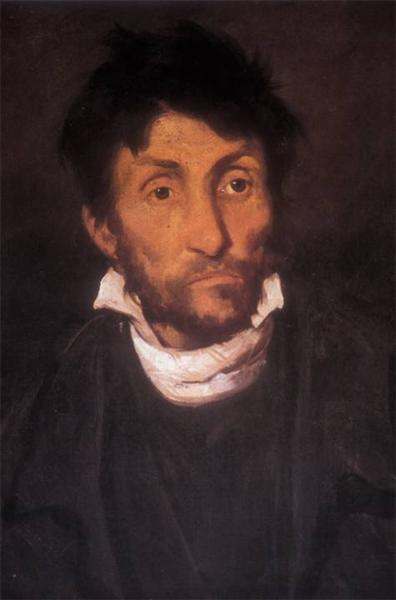 Portrait of a Kleptomaniac

Portrait of a Kleptomaniac or Portrait of an Insane Person (French : L'Aliéné or Le Kleptomane) is an 1822 oil painting by Théodore Géricault. It is part of series of ten portraits made for the psychiatrist Étienne-Jean Georget and is currently kept in the Museum of Fine Arts, Ghent, Belgium.

The painting belongs to a series of ten portraits of the insane inmates of Salpêtrière asylum in Paris. Géricault made it nearly the end of his career and the five remaining portraits from the series represent the painter's last triumph. Psychiatrist Étienne-Jean Georget, one of the founders of social psychiatry, asked Géricault to do this painting which would represent each clinical models of disease. Georget believed that dementia was a modern disease, which depended in large part of social progress in industrialized countries. He believed that the madmen who were mentally ill need help. Instead of bringing the ill persons in a class room to examine their physical characteristics, the doctor instructed Géricault to paint models representing different types of madness. Dr. Georget much appreciated the objectivity in this series of works that established a link between romantic art and empirical science.

The work was made quickly, which prefigured the concerns of the Impressionists. However, the painting did not belong to Impressionism. At the time, to give dignity to those who were mentally ill was new: they were generally excluded from society, and the previous works represented madmen as possessed creatures or ludicrous people, according to a medieval belief.

Géricault tried to show objectively the patient's face: the empty gaze of the kleptomaniac goes to infinity and his face is rigid, with a neglected beard and dirty neck. The paintings are noteworthy for their bravura style, expressive realism, and for their documenting of the psychological discomfort of individuals, made all the more poignant by the history of insanity in Géricault's family, as well as the artist's own fragile mental health.

Media related to Portrait of a Kleptomaniac at Wikimedia Commons