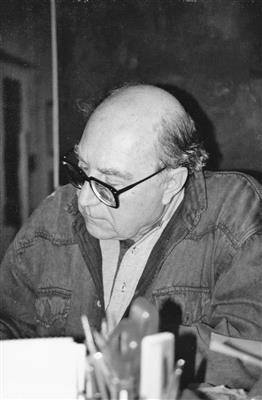 TAMAS, Ervin's art is constructed with plots of colors, his compositions have an exact geometry, but at the same time they have a remarkable ease and casualness. Rich motives and exciting arrangements are the secrets to his splendid atmospheres.

His early work described as naturalistic, later as lyrical abstract.


Ervin Tamás was born in Budapest, Hungary. He obtained his first diploma in graphic arts from the Budapest Academy of Applied Arts in 1941, and a second diploma from the Hungarian National Art Academy in 1946 as a pupil of ISTVÁN SZÖNYI.
Between 1946 and 1950, he was an art teacher in Debrecen. In 1950 he moved to Budapest and became a founding member of the Hungarian Free Art Trade Union. He had many active art-life roles: a member of numerous alliances, teacher, consultant, historian, and several years Secretary of the Art Foundation.
Tamás made study tours in Austria, England, France, Germany, Switzerland, Italy, Spain, Greece, and Russia.
Tamás participated in many international exhibitions and his paintings are found in public and private collections throughout the world.
The most influential artists for Tamás’ development as a painter, other than Szönyi, were Cézanne and Braque.

His works are in Musem collectios, notably in the