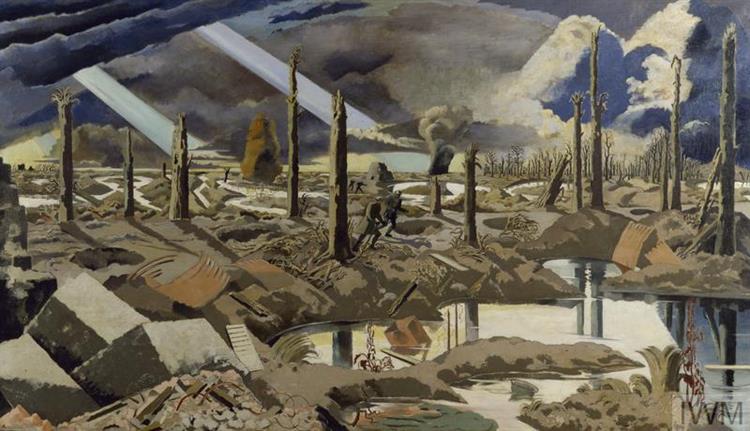 The proposed title for this work was A Flanders Battlefield. It had been commissioned by the Ministry of Information in 1918, on the theme of heroism and sacrifice, and was intended to be shown in a Hall of Remembrance dedicated to "fighting subjects, home subjects and the war at sea and in the air". The Hall, however, was never built, and the painting is far from a celebratory depiction of war. It shows a flooded trench, the ground split apart by shells, stumps of trees, and other broken debris including wire, metal, and concrete. In the background, smoke suggests that the destruction is ongoing. Nash himself suggested the following caption for the painting: "The picture shows a tract of country near Gheluvelt village in the sinister district of 'Tower Hamlets', perhaps the most dreaded and disastrous locality of any area in any of the theatres of War."

This is Ypres in Belgium, an area that was entirely destroyed during the Battle of the Menin Road Ridge. The extent of the devastation is further emphasized by two soldiers at the center of the picture who attempt to follow the road that no longer exists. Every inch of the picture is filled with some form of rubble, and none of the small crisscrossing paths reach the horizon. The resulting impression is that there is no escape or relief from this horror. As art historian Paul Gough notes, the viewer seeks a way through the obstacles, but "the horizon is unreachable, locked in some unimaginable future". Even the beams of sunlight that pierce through the scene have some resemblance to the barrels of guns. Man has utterly betrayed nature in this scene.

The color scheme of the painting has been said to derive from Flemish tapestries, whilst the artist and critic Wyndham Lewis's description: "an epic of mud" also calls to mind images of historic battle tapestries. Indeed, Gough praised Nash for capturing the disfigurement of the landscape and agreed with the artist that this was one of his finest works. There is a trace of Vorticist influence in these early war paintings by Nash. This was the English movement headed by Wyndham Lewis that aimed to express the dynamism of modernism through art and poetry. Nash has most in common with C.R.W. Nevinson - with both adopting an angular style for the battlefield - but this influence did not really become particularly decisive for him and did not impact his work anywhere near as much as his love for English landscape traditions from the 19th century.