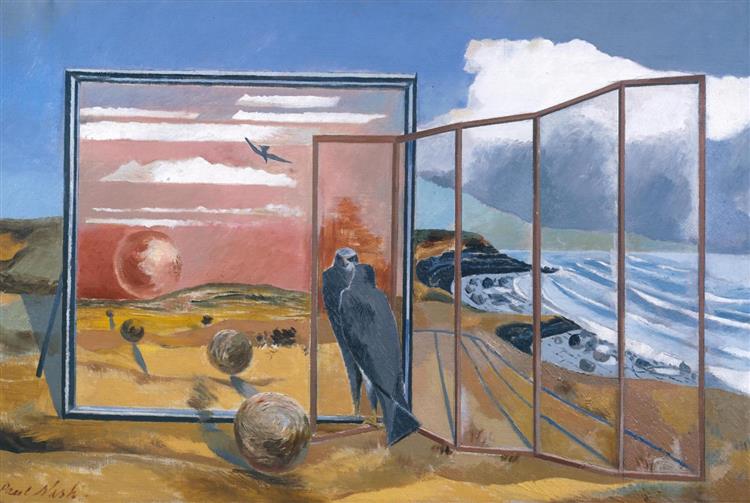 Landscape from a Dream

This painting is widely considered to stand as the culmination of Nash's personal response to Surrealism, in which he had taken an interest since the 1920s. The work was completed shortly after Nash visited the International Surrealist Exhibition of 1938 and it is inspired by the Surrealists' fascination with Freud as well as by their principle theories surrounding the power of dreams. At the time, Nash had also recently met and become a good friend of the Surrealist artist, Eileen Agar who like Nash spent a great deal of time walking the coast and finding inspiration there. Along with connections to Agar, the dominant cloud filled sky and central objects placed in a mystical landscape bear strong resemblance to the work of René Magritte. Magritte was a long-standing influence for Nash and one that he returned to towards the end of his career when painting his "aerial flower" series.

The painting shows a hawk contemplating itself in a mirror, in which there is also a landscape and several spheres. The action is set within another landscape - the Dorset coast - though it is contained between screens. The mixture of the unusual activity at the center of the painting combined with the recognizable surroundings outside it results in an overall impression that is both unsettling and intriguing. This combination of familiar and unexpected has much in common with the nature of dreams. Nash later explained the symbolism of each of the elements in the painting: the hawk represents the material world and the spheres, the soul.

The artist and historian Roland Penrose praised Landscape from a dream, drawing a similarity between the bird looking at itself in the mirror and the viewer contemplating the painting. He wrote that just as the bird "watches itself in a glass, waiting for the image to move so as to know which is really alive, itself or the image", Nash's paintings "[assert] their independent life". This idea of movement becomes more complex in view of the fact that Nash painted the bird from an Egyptian carving. Thus the "real" hawk is immobile and the flying hawk in the mirror is an illusion. The carving from which the hawk was painted now adorns the artist's grave.