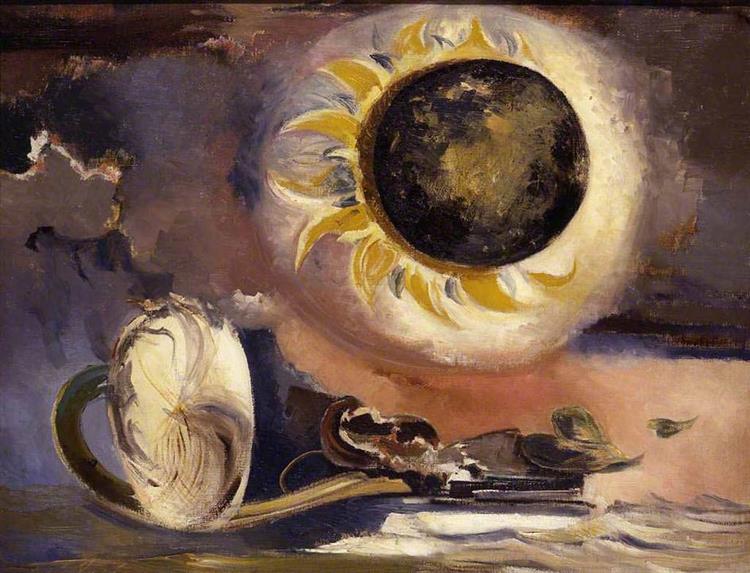 Eclipse of the Sunflower

From 1942 onwards, Nash had been visiting his friend and fellow artist Hilda Harrison's house in Oxfordshire, nearby his childhood home. Here he observed sunflowers obscuring his view of the Wittenham Clumps during summer. A curator at the Tate Gallery refers to his interest in the "rhyming shapes" of the rounded sunflower heads, hills, moon, and sun - a fascination that is reflected also by We Are Making a New World (1918) with its shafts of sunlight, and the steady moon in Totes Meer (1941). Eclipse of the Sunflower is one in an intended series of four paintings in which Nash wanted to use the life cycle of the sunflower to represent the sun in the sky - referring to his ambition as "exalt[ing]" the image of the sunflower. Before his death in 1946, the artist completed both this work and Solstice of the Sunflower (1945) but did not manage to paint The Sunflower Rises and The Sunflower Sets.

There are two sunflowers in Eclipse of the Sunflower, one in the bottom left, lying dead and withered, and one floating high in the position of the sun. This sunflower in the sky is healthy but is perhaps about to be eclipsed. The head of the dying sunflower has just become detached from its stem and thus some critics suggest that the picture represents looming death and the moment that the soul leaves the body. The inky background may have been inspired by the illustrations of William Blake, with details that are reminiscent of earlier landscape paintings, for example, the painterly cloud formations and waves in the bottom right corner. There is also a strong sense that the life cycle of the sunflower mirrors the waning and waxing of the moon, and thus the painting illustrates one of Nash's primary interests, that of death and rebirth and the ongoing continuum of natural forces.

Eclipse of the Sunflower is ever the more poignant image given Nash's first-hand experience of death during the war and now, that it is made shortly before his own life came to an end. Although he was only 57, the artist had been diagnosed with bronchial asthma and would die of pneumonia shortly after making this work. The artist's interest in the idea of renewal through death (inspired by poetry and religious myth) was influenced particularly by James Frazer's painting The Golden Bough (1926), which describes a Midsummer ritual of rolling burning "fire wheels" down a hill to imitate the movement of the sun, and William Blake's beautiful poem "Ah! Sunflower" (1794). With the life cycles of nature on his mind, Nash wrote in his essay Aerial Flowers (published posthumously in 1947): "Personally, I feel that if death can give us [a solution], death will be good."