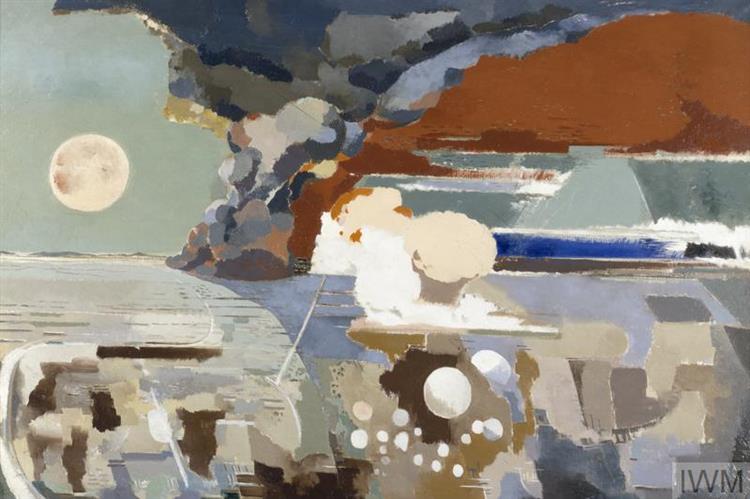 Battle of Germany was the last painting that Nash completed under his official employment for the War Artists' Advisory Committee (WAAC). The commission had stated that the committee would like a sequel to Nash's Battle of Britain (1941), a picture that would depict a flying bomb. Nash, however, was not inspired by this idea at all, writing "It has fallen through I think. I did not find any point of departure, no bomb site as it were to launch into a composition." Instead, Nash chose to paint a German city under attack from aerial bombardment. In order to do so, he was given access to reports from crews who had participated in German air raids. Despite such detailed research, there is very little evidence of this in what is essentially a predominately abstract canvas.

The composition of Battle of Germany is divided into "the suspense of the waiting city under the quiet though baleful moon" on the left, and the city under bombardment on the right. The former is characterized by stillness and quiet whereas the latter shows the "violently agitated" sky and sea. In the center, smoke and a red blaze loom over the city, whilst patches of color across the canvas suggest further blasts and spreading disruption. The group of small circles in the foreground represents parachutes, which poignantly and poetically mirror the form of the large moon. Overall, the painting is generally seen as the culmination of abstraction in the artist's work.

On seeing the painting, the Chairman of the WAAC Kenneth Clark responded with both admiration and confusion. Finding the "different planes of reality in which it is painted" - possibly the combination of abstract and figurative elements or the juxtaposition of two landscapes - difficult to understand, he nevertheless saw in the painting an innovative stride towards the future and to post-war art.