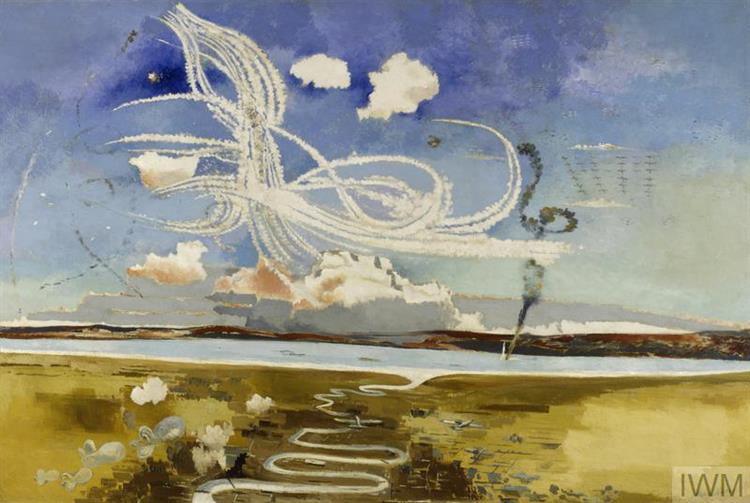 The composition for Battle of Britain was inspired by a 19th-century lithograph showing a storm over Paris, which Nash's wife Margaret had shown to her husband's pupil, Richard Seddon. At first glance, the coastal landscape, brilliant blue sky, and carefully rendered cloud formations dominate this painting, which takes a view from Britain in the foreground - across the English Channel - to France in the background. However, it soon becomes apparent that the scene is set in the midst of an aerial battle, the Battle of Britain, and that the landscape is under attack. Entwined with the clouds are the trailing paths of airplanes, whilst darker trails of smoke are signs of combat and of damaged, sometimes falling planes. At least one of these black smoke trails was not painted by Nash but by his student, Richard Seddon, who advised his teacher that he should add more of these destructive marks to the work.

Nash painted this work during the battle itself, explaining that it contains characteristic elements such as the winding river across the parched countryside, the cumulus clouds after a summer day, and the trails of airplanes in the sky, both those that are still flying and those that are burnt and falling. The Germain air force (Luftwaffe) can be seen advancing in formation, whilst - in a midst of vapor trails, cloud, smoke, parachutes, and balloons - British RAF pilots break up these forces at the center of the painting. The British planes rise almost from the earth itself, lending the landscape more grandeur, poetry, and dignity than is seen in Nash's earlier, more devastating paintings.

Characteristic of Nash's work at this time, the painting is not entirely true to life but takes on an imaginative and symbolic edge, which in part is demonstrated by discrepancies in scale between the action in the sky and the landscape below. Rather than render a particular, realistic battle scene, the painting speaks of large-scale, dramatic aerial conflict. Nash wrote, "The painting is an attempt to give the sense of an aerial battle in operation over a wide area and thus summarises England's great aerial victory over Germany." In this sense, it could be considered a patriotic work.