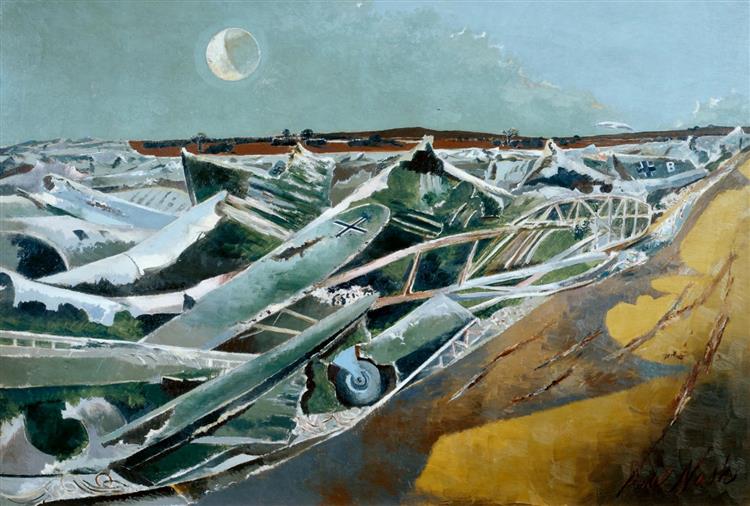 Totes Meer (Dead Sea) was painted during the Second World War. Nash wanted to title the work using the original German as he intended the picture to be seen by the German people and to reveal the fall and failure of their military attempts to dominate Europe. As such, the work can in a way be viewed as a subtle, patriotic statement in support of the British war effort. It was submitted to the War Artists' Advisory Committee in 1941 - for whom Nash worked intermittently throughout WWII - and shows a "dead sea" of destroyed German planes.

Nash based this painting on sketches and photographs that he had made and taken at the Metal and Produce Recovery Unit near his Oxford home. He then collaged his collection of images together to create a fragmented sea of battered remnants. He particularly wanted to represent German planes (as opposed to the British ones occupying most of the recovery unit) so as to illustrate the fate of the "hundreds and hundreds of flying creatures which invaded these shores". His unrealized vision was to distribute a postcard of this image throughout Germany as propaganda. Somewhat grimly, he even created a version of the painting with Hitler's head collaged on to the damaged aircraft, for this purpose. A year later, he extended this interest and made the work Follow the Fuhrer Above the Clouds (1942), whereby a squadron of German aircraft fly through the sky accompanied by a huge flying shark. Here Nash successfully uses techniques of Surrealist collage to convey the colossal and brutalising force of Adolf Hitler.

Paradoxically, the inclusion of the moon in the background of Totes Meer adds "incongruous beauty" to the painting and in typical Nash style, suggests the unwavering power of nature, in spite of man's atrocities. The landscape beyond the broken sea of planes suggests that salvation remains a possibility and that the destruction, though horrific, is not total. Kenneth Clark called Totes Meer "the best war picture so far", and this is an opinion still held by many. Of this painting and The Battle of Britain (1944), Clark further commented on Nash, "you have discovered a new form of allegorical painting. It is impossible to paint great events without allegory ... and you have discovered a way of making the symbols out of the events themselves".