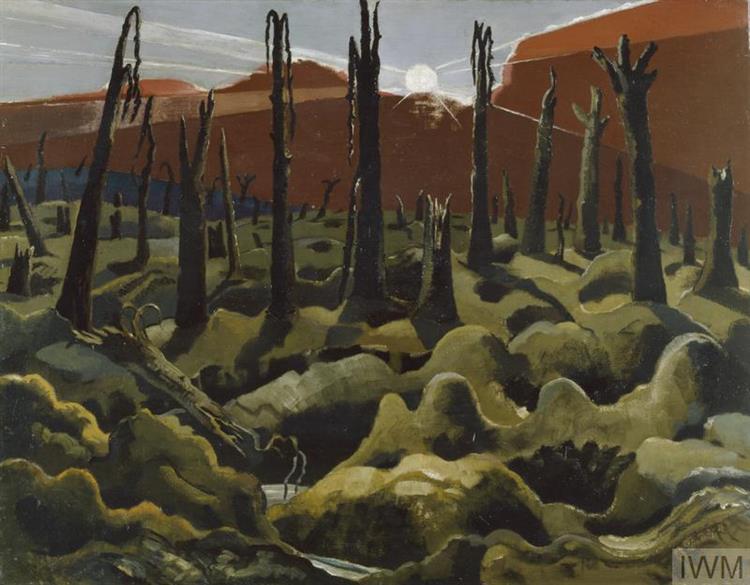 We are Making a New World

Having returned from his service in WWI with many watercolors and pastel sketches depicting the landscapes he had seen, this is one of Nash's first oil paintings, based on the drawing Sunrise, Inverness Copse (1918). Both his drawing and painting that followed depict the war-torn Western Front, where the trees have been burned or beaten away and the earth has become scarred and undulated by shell holes. There are no people, but the tree stumps have an eerie human presence. Indeed, the trees are either personified or they stand as gravestones for the men no longer standing there themselves.

Despite a tone of pessimism and a scene wrought with destruction, the sun beats down and continues to illuminate this land. This light works on two levels; it shows a glimmer of hope that Nash cannot let go of, but also introduces a tone of mockery with regards the purpose and intent of war. The latter rings particularly true when considered in respect to the title of the work - We are making a new world - which acts both as a parody of the naive ambitions of war and as a description of how the landscape has been subjected to such destruction that it is almost unrecognizable. A former curator at The Imperial War Museum, Roger Tolson, affirms "In Nash's bitter vision the sun will continue to rise each and every day to expose the desecration and to repeat judgment on the perpetrators. This new world is unwanted, unlovable but inescapable."

This work is generally considered to be one of the most memorable images of the First World War and has been compared to Picasso's Guernica (1937) - the Spanish Master's legendary response to the bombing of the eponymous town. Nash poignantly subverts the usually peaceful and picturesque English landscape tradition and introduces a new element of horror. As such, the painting well embodies his comments of the previous year with respect to his role as a war artist: "I am a messenger who will bring back word from men fighting to those who want the war to last forever." This message, he claimed, would reveal the "bitter truth" of war.