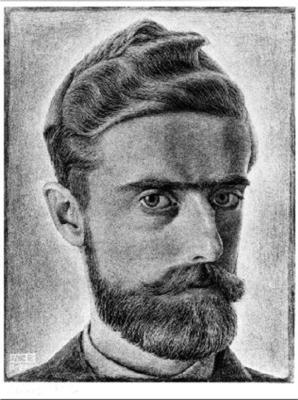 His work features mathematical objects and operations including impossible objects, explorations of infinity, reflection, symmetry, perspective, truncated and stellated polyhedra, hyperbolic geometry, and tessellations. Although Escher believed he had no mathematical ability, he interacted with the mathematicians George Pólya, Roger Penrose, Harold Coxeter and crystallographer Friedrich Haag, and conducted his own research into tessellation.

Early in his career, he drew inspiration from nature, making studies of insects, landscapes, and plants such as lichens, all of which he used as details in his artworks. He traveled in Italy and Spain, sketching buildings, townscapes, architecture and the tilings of the Alhambra and the Mezquita of Cordoba, and became steadily more interested in their mathematical structure.

Escher's art became well known among scientists and mathematicians, and in popular culture, especially after it was featured by Martin Gardner in his April 1966 Mathematical Games column in Scientific American. Apart from being used in a variety of technical papers, his work has appeared on the covers of many books and albums. He was one of the major inspirations of Douglas Hofstadter's Pulitzer Prize-winning 1979 book Gödel, Escher, Bach.

Despite wide popular interest, Escher was for long somewhat neglected in the art world; even in his native Netherlands, he was 70 before a retrospective exhibition was held. In the twenty-first century, he became more widely appreciated, with exhibitions across the world.

Maurits Cornelis Escher was born on 17 June 1898 in Leeuwarden, Friesland, the Netherlands, in a house that forms part of the Princessehof Ceramics Museum today. He was the youngest son of the civil engineer George Arnold Escher and his second wife, Sara Gleichman. In 1903, the family moved to Arnhem, where he attended primary and secondary school until 1918. Known to his friends and family as "Mauk", he was a sickly child and was placed in a special school at the age of seven; he failed the second grade. Although he excelled at drawing, his grades were generally poor. He took carpentry and piano lessons until he was thirteen years old.

In 1918, he went to the Technical College of Delft. From 1919 to 1922, Escher attended the Haarlem School of Architecture and Decorative Arts, learning drawing and the art of making woodcuts. He briefly studied architecture, but he failed a number of subjects (due partly to a persistent skin infection) and switched to decorative arts, studying under the graphic artist Samuel Jessurun de Mesquita.

In 1922, an important year of his life, Escher traveled through Italy, visiting Florence, San Gimignano, Volterra, Siena, and Ravello. In the same year, he traveled through Spain, visiting Madrid, Toledo, and Granada. He was impressed by the Italian countryside and, in Granada, by the Moorish architecture of the fourteenth-century Alhambra. The intricate decorative designs of the Alhambra, based on geometrical symmetries featuring interlocking repetitive patterns in the coloured tiles or sculpted into the walls and ceilings, triggered his interest in the mathematics of tessellation and became a powerful influence on his work.