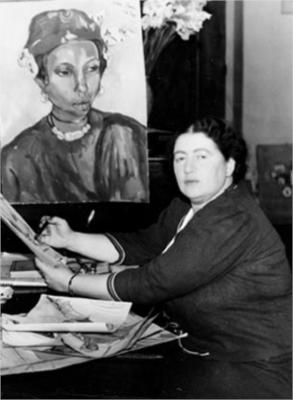 She was born in Schweizer-Reneke, a small town in the Transvaal, of German-Jewish parents. Her father was interned in a concentration camp by the British during the South African War because of his pro-Boer leanings.[1] Irma and her younger brother, Rudi, were thus taken to Cape Town by their mother. After the war, the family returned to Germany and constant travel. This travel would influence Irma's work.

In 1913 Stern studied art in Germany at the Weimar Academy, in 1914 at the Levin-Funcke Studio and notably from 1917 with Max Pechstein, a founder of the Novembergruppe. Stern was associated with the German Expressionist painters of this period. She held her first exhibition in Berlin in 1919. In 1920 Stern returned to Cape Town with her family where she was first derided and dismissed as an artist before becoming an established artist by the 1940s.

In 1926 she married Dr Johannes Prinz, her former tutor, who subsequently became professor of German at the University of Cape Town. They were divorced in 1934.

Irma Stern travelled extensively in Europe and explored Southern Africa, Zanzibar and the Congo region. These trips provided a wide range of subject matter for her paintings and gave her opportunities to acquire and assemble a collection of artifacts. Stern's dream was to travel extensively in her lifetime: in 1930 to Madeira, in 1937 and 1938 to Dakar, Senegal, 1939 Zanzibar, 1942 Congo, 1945 Zanzibar, 1946 Central Africa, 1952 Madeira, 1955 Congo, 1960 Spain and 1963 France. Stern travelled extensively in South Africa, for example in 1926 to Swaziland and Pondoland, in 1933 to Namaqualand, in 1936 generally, and in 1941 to the Eastern Cape. In 1931 she visited Madeira and Dakar, Senegal, in 1937 and 1938. Irma Stern refused to either travel or exhibit in Germany during the period 1933 - 1945. Instead, she undertook several journeys into Africa; going to Zanzibar twice in 1939 and 1945 and then planned three trips to the Congo region in 1942, 1946 and 1955. These expeditions resulted in a wealth of artistic creativity and energy as well as the publication of two illustrated journals; Congo published in 1943 and Zanzibar in 1948.

Almost one hundred solo exhibitions were held during her lifetime both in South Africa and Europe: including Germany, France, Italy and England. Although accepted in Europe, her work was unappreciated at first in South Africa where critics derided her early exhibitionsin the 1920s with reviews titled "Art of Miss Irma Stern - Ugliness as a cult".

The Irma Stern Museum was established in 1971 and is the house the artist lived in for almost four decades. She moved into The Firs in Rondebosch in 1927 and lived there until her death. Several of the rooms are furnished as she arranged them while upstairs there is a commercial gallery used by contemporary South African artists.

On 8 May 2000, one of her works sold at Sotheby’s South Africa in Johannesburg for an all-time record of R1.7 million. This record was soon broken, however, and in March 2007 Stern's work was sold for R6.6 million. Stern's Gladioli was sold for an all-time high of R13.3 million in October 2010, but was then followed by the sale of Bahora Girl for R26.7 million later that month - both were also records for sales of South African art at the time. A new South African record was set in March 2011, when a Stern painting sold for R34 million at Bonham's, London.