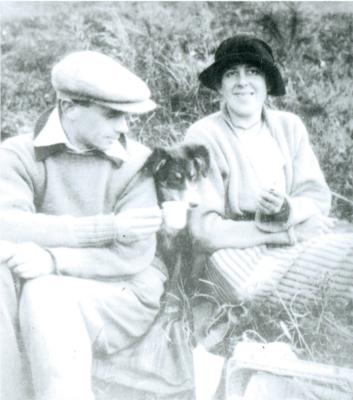 Winifred Nicholson was a colourist who developed a personal impressionistic style, concentrating on domestic still life objects and landscapes. She often combined the two subjects as seen in her painting From Bedroom Window, Bankshead showing a landscape viewed through a window, with flowers in a vase in the foreground.

Nicholson was born Rosa Winifred Roberts in Oxford on 21 December 1893. She was the eldest of the three children of the Liberal Party politician Charles Henry Roberts and Lady Cecilia Maude Howard, daughter of the politician George Howard, 9th Earl of Carlisle, and of the activist Rosalind Howard. Nicholson started painting as a teenager with her grandfather George Howard, who was a capable amateur painter and a friend of the Pre-Raphaelites William Morris and Edward Burne-Jones, and of the Italian landscape painter Nino Costa, founder of the Etruscan School. Nicholson attended the Byam Shaw School of Art in London from about 1910 or 1912 until the outbreak of the First World War in 1914, and again from 1918–1919.

In 1919 Nicholson travelled with her father, who had been Under-Secretary of State for India, to Burma (now Myanmar), Ceylon (now Sri Lanka) and India.

On 4 November 1920 she married the artist Ben Nicholson, the son of the painter Sir William Newzam Prior Nicholson and his wife, the painter Mabel Pryde. The couple bought a villa in Switzerland, the Villa Capriccio near the village of Castagnola on the north shore of Lake Lugano in Ticino. They spent the winters in Switzerland and the summers in Britain, painting still-lifes and landscapes. In 1924 Winifred bought Bankshead, a farmhouse built on an ancient Roman castle forming part of Hadrian's Wall, not far from the town of Brampton in Cumbria, and close to the family seat, Naworth Castle.

In 1924 Nicholson, who believed that she was unable to conceive, joined the Christian Science movement, which was in vogue in Britain at that time. She and Ben eventually had three children: Jake was born in 1927, Kate in July 1929, and Andrew in 1931. By the time of Kate's birth there were tensions in the marriage, and these were exacerbated by the suicide of their close friend, the painter Kit Wood, in August 1930. In 1931 Ben met Barbara Hepworth – whom he later married – and he and Winifred separated. In 1932 Winifred moved with her three children to Paris, and from then until 1936 Ben often visited them there, sometimes with Hepworth. The marriage ended in divorce in 1938, and Ben married Hepworth in November of the same year.

Although it is sometimes said incorrectly that with Ben, Winifred formed part of the artist colony at St Ives, Cornwall, she was never permanently living there. Although she painted less in the abstract style than in the representational, she did experiment with her own form of abstraction in the 1930s. Influences between her and Ben were mutual, Ben often admitting he learnt much about colour from his first wife. After they separated, she lived half of each year during the 1930s in Paris. After her divorce from Ben Nicholson in 1938, she spent most of the rest of her long life in Cumberland, at Boothby where her father lived, and at Bankshead, both near Lanercost.