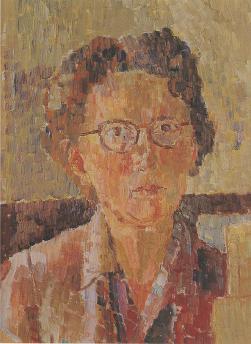 Grace Cossington Smith AO OBE (20 April 1892 – 20 December 1984) was an Australian artist and pioneer of modernist painting in Australia and was instrumental in introducing Post-Impressionism to her home country. Examples of her work are held by every major gallery in Australia.

She was born Grace Smith, in Neutral Bay, Sydney, second of five children of London-born solicitor Ernest Smith and his wife Grace, née Fisher, who was the daughter of the rector of Cossington in Leicestershire. The family moved to Thornleigh, New South Wales around 1890. Grace attended Abbotsleigh School for Girls in Wahroonga 1905–09 where Albert Collins and Alfred Coffey took art classes. From 1910 to 1911 she studied drawing with Antonio Dattilo Rubbo. From 1912 to 1914 she and her sister lived in England, staying with an aunt at Winchester where she attended drawing classes as well as classes at Stettin in Germany, and was exposed to paintings by Watteau in Berlin.

After returning to Sydney in 1914 she attended Dattilo Rubbo's painting classes alongside Norah Simpson and took an interest in modernist theories. Her The Sock Knitter (1915) was arguably Australia's first post-Impressionist painting.

Her work was greatly respected by fellow-artists Roland Wakelin and Roy de Maistre. She exhibited with the Royal Art Society of New South Wales from 1915, the Society of Artists from 1919 and Thea Proctor's Contemporary Group at Adrian Feint's Grosvenor Gallery from 1926 to 1928, and from 1932 to 1971,at the Macquarie Galleries.

Her painting is characterised by individual, square brush strokes with bright unblended colours. Her many paintings of Sydney landscapes, still lifes, and interiors include Kuringai Avenue (1943), Fruit in the Window (1957), and, arguably her most famous painting, The Lacquer Room (1936). She received acclaim late in her career, and in 1973 a major retrospective exhibition of her work toured Australia.

One of Australia's most important artists of the twentieth century, Grace Cossington Smith, was best known for her modernist depiction of a Sydney cafeteria, paintings of the arch of the Sydney Harbour Bridge as it was being built, and her late indoor scenes of doorways and windows where yellow is usually the dominant colour. Many of her scenes give a glimpse of the ordinary suburban home of her time: still lives, doorways and window sills. She also sometimes painted important events such as the World Wars and the arrival of the Prince of Wales in Sydney, which show a broader view of what was happening in Australia and the world at the time.

She used great sunlight and wonderful patterns of vibrant colour with cool colours added to shadows, giving them a sense of energy. Using carefully placed brush strokes of brilliant colour side by side to build up small squares, she built form in colour. She was one of the earliest Australian artists to be influenced by the European Post-Impressionist movement and lead a break away from Australian Impressionism. A contemporary of Margaret Preston and Thea Proctor, her works were very daring for the time. Her main interest was colour, bright shimmering colour filled with reflected sunlight. She supported modernism and developed her own individual technique. It was said that she "did get a lot of criticism in the press, but she was very bold and she knew what she wanted."