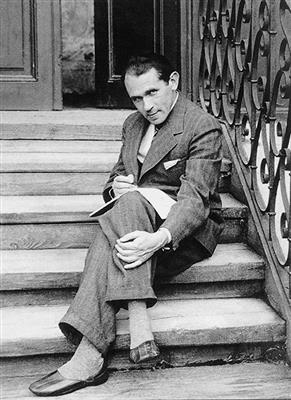 Bruno Schulz (July 12, 1892 – November 19, 1942) was a Polish Jewish writer, fine artist, literary critic and art teacher. He is regarded as one of the great Polish-language prose stylists of the 20th century. In 1938, he was awarded the Polish Academy of Literature's prestigious Golden Laurel award. Several of Schulz's works were lost in the Holocaust, including short stories from the early 1940s and his final, unfinished novel The Messiah. Schulz was shot and killed by a German Nazi in 1942 while walking back home toward Drohobycz Ghetto with a loaf of bread.


Schulz was born in Drohobych, Austrian Galicia, historically part of the Kingdom of Poland before the three partitions, and today part of Ukraine. After World War One, Drohobycz became part of the Lwów Voivodeship. Bruno Schulz was the son of cloth merchant Jakub Schulz and Henrietta née Kuhmerker. At a very early age, he developed an interest in the arts. He attended Władysław Jagiełło Middle School in Drohobych from 1902 to 1910, graduating with honours. He then studied architecture at Lviv Polytechnic. His studies were interrupted by illness in 1911 but he resumed them in 1913 after two years of convalescence. In 1917 he briefly studied architecture in Vienna. At the end of World War I, when he was 26, Drohobycz became part of the newly reborn Polish Second Republic. Schulz returned to Władysław Jagiełło Middle School, teaching crafts and drawing from 1924 to 1941. His employment kept him in his hometown, although he disliked the teaching, apparently maintaining his job only because it was his sole source of income. He also amused himself by telling his students stories during classes.


Schulz developed his extraordinary imagination in a swarm of identities and nationalities: he was a Jew who thought and wrote in Polish, was fluent in German, immersed in Jewish culture, yet unfamiliar with the Yiddish language. He drew inspiration from specific local and ethnic sources, looking inward and close to home rather than to the world at large. Avoiding travel, he preferred to remain in his provincial hometown, which over the course of his life belonged to or was fought over by successive states: the Austro-Hungarian Empire (1792–1919); the short-lived West Ukrainian People's Republic (1919); the Second Polish Republic (1919–1939); the Soviet Ukraine from the invasion of Poland in 1939; and, during Operation Barbarossa, Nazi Germany after the German attack on the Soviet Union in 1941. His writings avoided explicit mention of world events of the time period.


Schulz was discouraged by influential colleagues from publishing his first short stories. However, his aspirations were refreshed when several letters that he wrote to a friend, in which he gave highly original accounts of his solitary life and the details of the lives of his family and fellow citizens, were brought to the attention of the novelist Zofia Nałkowska. She encouraged Schulz to have them published as short fiction. They were published as The Cinnamon Shops (Sklepy Cynamonowe) in 1934. In English-speaking countries, it is most often referred to as The Street of Crocodiles, a title derived from one of its chapters. The Cinnamon Shops was followed three years later by Sanatorium Under the Sign of the Hourglass, (Sanatorium Pod Klepsydrą). The original publications were illustrated by Schulz; in later editions of his works, however, these illustrations were often left out or poorly reproduced. In 1936 he helped his fiancée, Józefina Szelińska, translate Franz Kafka's The Trial into Polish. In 1938, he was awarded the Polish Academy of Literature's prestigious Golden Laurel award.