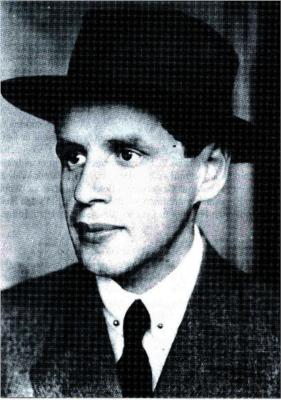 Lasar Segall (July 21, 1891 – August 2, 1957) was a Brazilian Jewish painter, engraver and sculptor born in Lithuania. Segall's work is derived from impressionism, expressionism and modernism. His most significant themes were depictions of human suffering, war, persecution and prostitution.

Segall was born in Vilnius, Lithuania, the son of a Torah scribe.

Segall moved to Berlin at the age of 15 and studied first at Berlin Königliche Akademie der Künste from 1906 to 1910. At the end of 1910 he moved to Dresden to continue his studies at the Kunstakademie Dresden as a "Meisterschüler".

Segall published a book of five etchings in Dresden, Sovenirs of Vilna in 1919, and two books illustrated with lithographs titled Bubu and die Sanfte. He then began to express himself more freely and developed his own style, which incorporated aspects of Cubism, while exploring his own Jewish background. His earlier paintings throughout 1910 to the early 1920s depicted troubled figures surrounded in claustrophobic surroundings with exaggerated and bold features, influenced by African tribal figures.

In 1912 his first painted series of works were conducted in an elderly insane asylum. Segall's work largely portrayed the masses of persecuted humanity in his Expressionist form. Later that year, he moved to São Paulo, Brazil, where three of his siblings were already living.

He returned to Dresden in 1914 and was still quite active in the Expressionist style. In 1919 Segall founded the 'Dresdner Sezession Gruppe 1919' with Otto Dix, Conrad Felixmüller, Otto Lange and other artists. Segall's exhibition at the Galery Gurlitt received multiple awards. However successful Segall was in Europe, he had already been greatly influenced by his time spent in Brazil, which had already transformed both his style and his subject matter. The visit to Brazil gave Segall the opportunity to obtain a strong idea of South American art and, in turn, made Segall return to Brazil yet again.

Though Segall was still a Russian citizen, he moved back to Brazil in 1923. Upon Segall's return to São Paulo he obtained Brazilian citizenship along with his first wife, Margarete.

While in Brazil, his paintings were influenced heavily by the Red Light District in Rio de Janeiro. Many Brazilian artists influenced Segall's subject matter and strengthened his Cubist form. He became acclimated within his newfound country and painted themes contributing to Brazil's countryside, mulattoes, favelas, prostitutes and plantations. Due to the harsh and extreme nature of Segall's portrayal of prostitutes and his depiction of human suffering, his artwork became controversial. This particular controversy in his artwork caused he and other well known artists to organize a pro Modernist event known as the Semana de Arte Moderna.

In the year 1923, the Semana de Arte Moderna was organized Segall included, being one of the mainstream forerunners in the art exhibition. The week-long event included Segall's work, as well as Anita Malfatti's largely controversial artwork. Not only were paintings included, but performances and other art forms were conducted at the event. Segall's avant garde innovations ranked him highly among other Brazilian outstanding modern artists during that time, like Candido Portinari and Emiliano Di Cavalcanti.