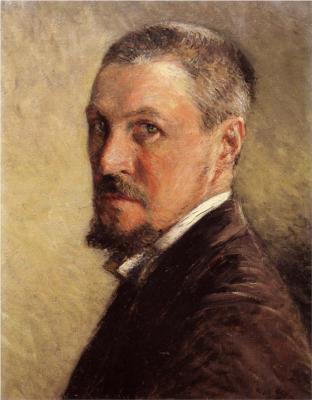 Gustave Caillebotte was one of the leading figures of the French Impressionist movement, although he painted more realistically than other impressionists. He was born in 1848 into a wealthy upper-class Parisian family. Despite being a trained engineer, he took an interest in painting and began studying under painter Léon Bonnat and later entered the École des Beaux-Arts. In 1874, he befriended Impressionist painters Claude Monet and Pierre-Auguste Renoir, and gradually became acquainted with art outside of academic circles.

Caillebotte’s earliest masterpiece The Floor Scrapers (1875) is one of the first paintings depicting the urban working class. Although the painting demonstrated Caillebotte’s academic training, it was rejected by the Salon in 1875. The Jury, who was likely shocked by the crude realism of the painting, criticized the artist’s ‘vulgar’ choice of subject. The rejection propelled Caillebotte to join the Impressionists, and he participated in the second Impressionist exhibition in 1876, where he presented several paintings including The Floor Scrapers.

Throughout the 1870s, Caillebotte focused on depicting the modern urban environment of Paris, a result of the sweeping renovation commissioned by Emperor Napoleon III and directed by his prefect of Seine, Baron Georges Haussmann. Large canvases like Le Pont de l’Europe (The Europe Bridge) (1876) and Paris Street; Rainy Day (1877) shows the urban landscape of Paris populated by the bourgeois and the working class. Although these were typical Impressionist subjects, Caillebotte’s meticulous and crisp brushwork stood in contrast to the free and quick brushwork of colleagues like Monet and Renoir. Rather than creating the impression of a dynamic and fleeting moment, Caillebotte’s paintings capture a frozen time, resembling photographic snapshots.

Caillebotte’s work was characterized by his bold use of perspective: he experimented with expanded perspectives, sharp angles, and tilted vantage points. The artist was influenced by the advent of photography, sometimes using photographs as source material and imitating photographic effects such as cropping and zooming in. He also showed an interest in Japanese prints, which influenced his compositions and led him to experiment with flattened forms. These experiments can be seen in paintings such as View of Roofs (Snow Effect) (1878) and The Boulevard Viewed From Above (1880).

In the latter half of his career, Caillebotte’s brushwork became freer and looser, resembling the style of his Impressionist colleagues. He painted a variety of subjects, rural landscapes, boating scenes, still-lifes, and portraits. Many of his later works were scenes surrounding his property at Petit-Gennervillers, on the banks of the Seine near Argenteuil. Notable examples include Sailing boats at Argenteuil (1888) and The Plain of Gennevilliers from the Hills of Argenteuil (1888).

In addition to being an active member of the Impressionist group, Caillebotte was also an important patron and benefactor of the movement. After receiving his inheritance, he helped to fund, organize, and promote Impressionist exhibitions as well as purchased the works of Monet, Renoir, Camille Pissarro, Edgar Degas, Alfred Sisley, and others. Caillebotte died of pulmonary congestion in 1894 at the age of 45.

Despite his pivotal role in the Impressionist movement, Caillebotte is the least known of the French Impressionists. Being of financial means, Caillebotte never depended on his art for income, overtime he exhibited less frequently, and he also had no reason to sell his paintings. Because of this, most of his works remained out of the public eye and rarely entered public collections. In his will, Caillebotte bestowed his collection to the French state, and the collection became a cornerstone of Impressionist art in French national museums. In part, it was his generous contribution and role as an art benefactor that overshadowed his artistic accomplishments. Around seventy years after his death, art historians began reassessing Caillebotte’s oeuvre, studying and acknowledging his contribution to Impressionism.